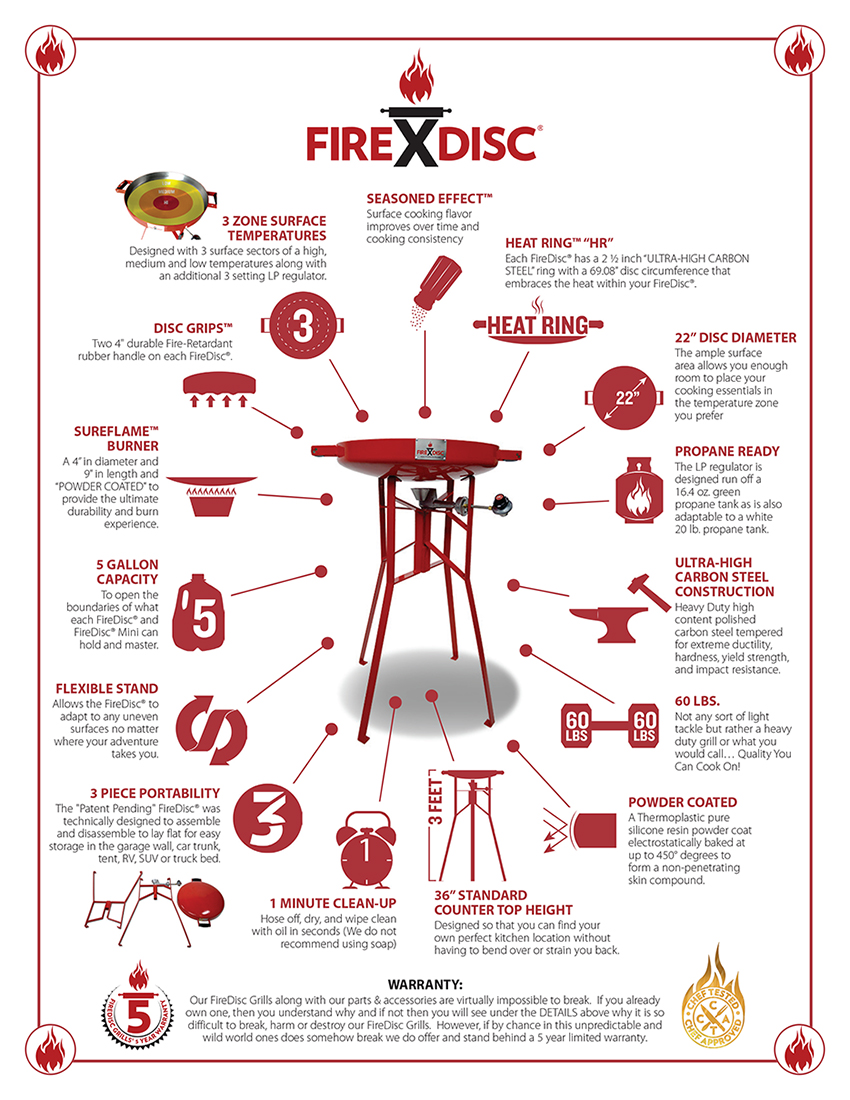 KATY, TX - 12/8/2015 (PRESS RELEASE JET) --  FireDisc® Grills Co-founders, brothers and best friends, Hunter and Griffin Jaggard, are no strangers to entrepreneurship. They were raised by hardworking parents who instilled a strong work ethic and the passion and tenacity to solve problems. As early as age 6/8 the duo had already launched their first business venture – selling golf balls painstakingly retrieved from the landscape bordering the neighborhood course. Their daily perseverance hunting golf balls throughout all weather conditions yielded a loyal customer base – and a few colds. By High school the brothers had an entire series of business pursuits under their belt ranging from a garage-based bike repair shop to the invention of a popular potato gun. The potato gun was an instant success, achieving impressive sell-through despite the burning of their supportive father’s eyebrows during the proto-type development phase. Their entrepreneurship did not end with golf balls, bikes and potato guns.

Avid outdoor enthusiasts, the two inventors thrived on designing unique solutions to solve day-to-day challenges. For example, their active lifestyle afforded many a camping, hunting, fishing and tailgating adventure, yet each was fraught with frustration by the lack of adequate methods to cook up delicious meals for large groups in the outdoors. After numerous fails with just about every grill on the market at the time, the brother team set out on a mission to develop the world’s most innovative grill. They reached back to family experiences on a Texas farm where big groups were fed field-side on makeshift grills. Those memories were the seed of FireDisc® Grills.

In 2010, armed with a tractors plow disc and a welding shop for hire, the brothers set out to design a grill that was portable, yet bullet-proof, and could out-cook any other gas grill on the market. FireDisc® Grill and a collection of accessories are now sold via 300+ retail locations throughout the country and online across the globe. Here are a few reasons why a FireDisc® Grill is in a league of its own.

“I have cooked on a number of gills in my life and I honestly challenge anyone to find a grill that is more versatile and durable than a FireDisc®,”says Conor Moran, Executive Chef, Copper Chef’s Catering & FireDisc® Grills Executive Chef “The FireDisc will literally be that last grill you will ever want to own.”

Cutting Board with Knife Sharpener

About FireDisc® Grills:
Texas-based FireDisc® Grills specializes in the design and manufacturing of the world’s most the innovative, high-quality and versatile outdoor grills and accessories. The company was founded by two entrepreneurial brothers, Griffin and Hunter Jaggard, who, armed with a makeshift tractor plow disc set out on a mission to build a grill worthy of everyone from the world’s top chef’s to hunters, backyard family grill masters, tailgaters and campers. FireDisc® Grill products are currently sold nationally via 300+ retail locations in 31 states and online throughout the globe.

Heavy-duty carbon steel construction render the grills indestructible, while meticulous designs yield convenient portability and ease-of-use. A rigorous “Chef-tested/Chef-Approved” quality assurance program enables the grills to deliver unmatched grilling characteristics, as they have been vetted by some of the world’s leading chef’s. Prior to their launch of FireDisc® Grills, the founders formed a non-profit to raise money and find a cure for MS. To date $1M has been raised via “The Carney Men” Bike MS team. Community involvement is the core of the FireDisc® brand in addition to the National MS Society they are proud supporters of the National Breast Cancer Foundation Inc, Bridges to Life and many more.