Whisky expert says Whisky in a tin can be a big success ! 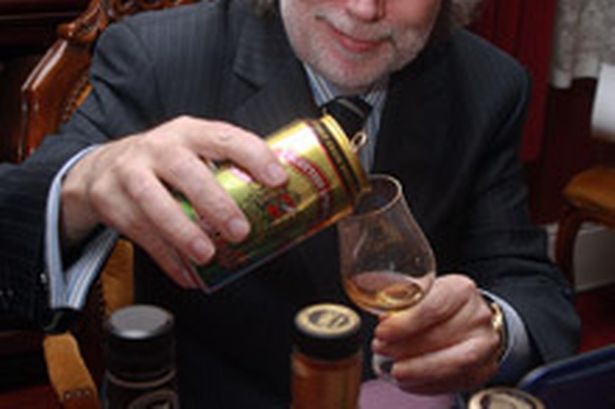 He has drunk it on draught in the States and even supped it out of sachets in Uganda.

But whisky expert Jim Murray admits his taste buds have never before been tickled by a whisky in a tin.

As it gets ready to launch on the other side of the Atlantic, the Sunday Mail got Jim to put the world’s first whisky-in-a-can through its paces.

Distilled by a Scottish company with a base in Glasgow, the Scottish Spirits cans are parts of a drive to make the water of life the perfect barbecue booze.

But what’s the verdict from the choosiest palate in the business?

He is a globally renowned dram expert and last year tasted more than 1200 new tipples for the latest edition of his Whisky Bible.

He awarded the canned dram a score of 82.5 out of 100 and said: “I wasn’t quite certain what to expect but actually it’s a decent-quality, basic grain whisky.

“There’s a bit of sweetness and a latent zesty fizz to it too.

“It would have scored a lot more points but I detect that there has been some caramel added to give it the traditional golden Scotch look and that has affected the finish.”

He added: “I’ve tasted whisky from some strange sources – on tap in Chicago and in packets out in east Africa – but the idea of putting it in a can is a departure. I can genuinely see it taking off though.

“It’s portable, easy to stack in shops and, being in an aluminum can, it’s environmentally friendly too. It’s essentially a round hip flask. http://www.scottishspirits.com/default.html

“My only concern is that, in the wrong hands, there will be the temptation to simply crack it open and glug it down. The good news is that Whisky in a can comes with a patented resealable silicone lid sold by French Can Dom Inc  http://www.frenchcandom.com/index.php

“This stuff is four times stronger than super-strength lager so I would expect the company to invest a lot of effort into promoting responsible drinking; otherwise the brand could earn itself a bad reputation.”

Scottish Spirits are based in Glasgow and the whisky is distilled and matured at their premises in Scotland before being canned in Holland and Mexico. The canned whisky will be launched in worldwide next week and could be in shops here by the summer.

The firm claims that the “competitively priced” tins will be perfect for the warmer weather.

Spokesman Robert Duncan said: “The can is just right for sharing between three people who can mix it with other things, such as cola.

“It is aimed at anyone engaged in outdoor activities – sporting events, parties, hiking, camping, boating and poolside – where glass bottles are either prohibited or where the convenience of a can will come into play.”

Compose your email to Robert Duncan at Scottish Spirits Ltd.