Thomas Girardi selected as "Man of the Year" and "Lifetime Achievement Award Member" for 2017 by the International Association of Top Professionals (IAOTP)! 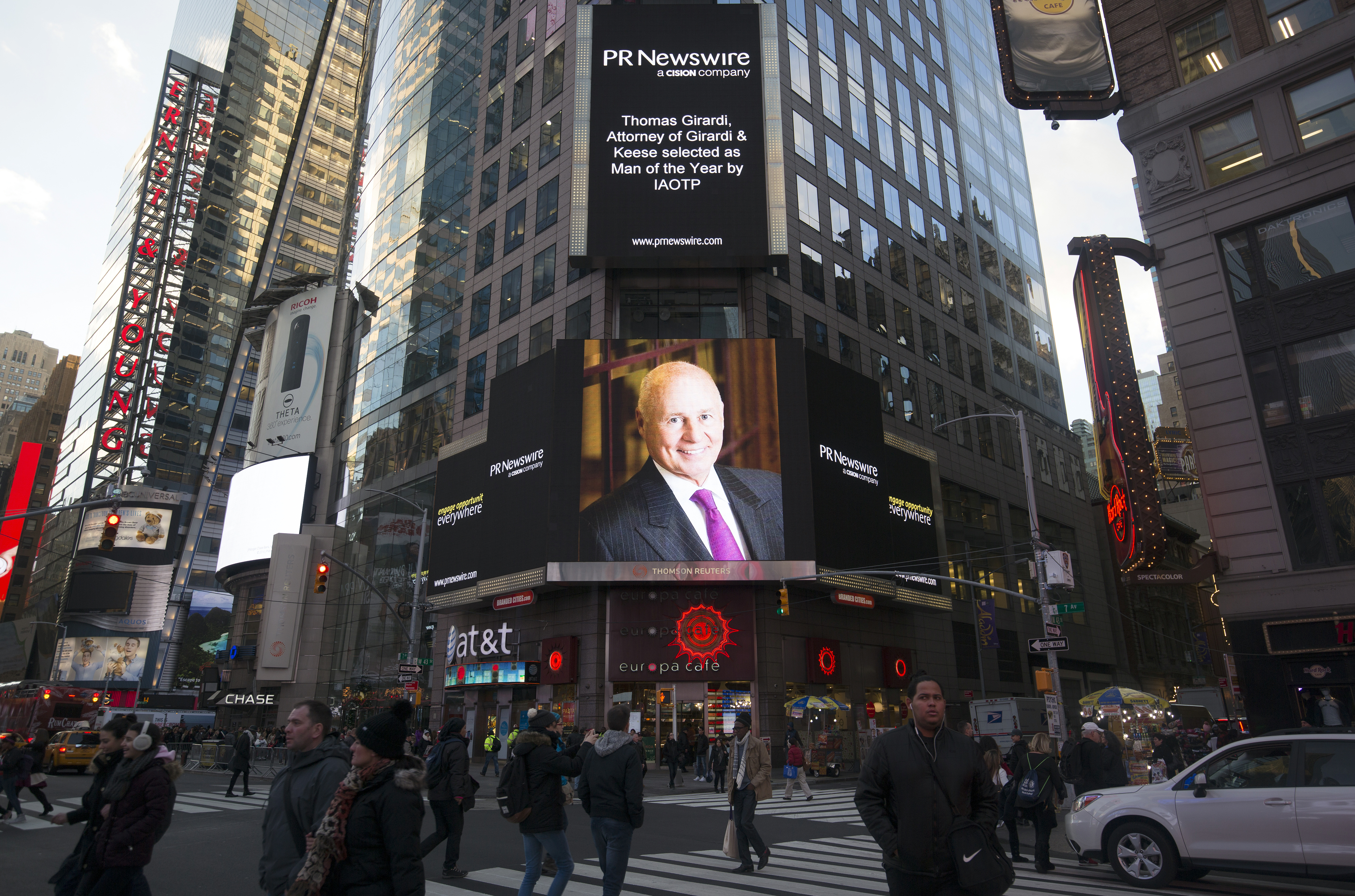 Thomas Vincent Girardi, Attorney and Founding Partner of Girardi & Keese, has been selected as "Man of the Year" & for the prestigious “Lifetime Achievement Award” for 2017 by the International Association of Top Professionals (IAOTP).

While inclusion with the International Association of Top Professionals is an honor in itself, only 1 Man is chosen for “Man of the Year” and for the Lifetime Achievement Award only a few members are chosen for this distinction based on their years of experience in the field, professional accomplishments, academic achievements, leadership abilities, and contributions to their communities.  These are truly incredibly talented professionals who have dedicated their life to their work and have had a lifetime of achievement and success!

Mr. Girardi was honored at the 2016 IAOTP’s Annual Award Gala, at the luxurious Garden City Hotel.  IAOTP presented Tom with the Sapphire Diamond Crystal piece engraved for his Lifetime of Achievement and Success and the Crystal Tower Globe piece for his “Man of the Year” distinction.  He was also honored and featured on a billboard on the famous Reuters Building in Times Square, NY.

Mr. Girardi is a recipient of the Lifetime Achievement Award and is being recognized as “Man of the Year,” for his 50 years of service as a practicing attorney, his endless list of professional accomplishments, academic achievements, leadership abilities, his dynamic and charismatic personality and his contribution to society.  Stephanie Cirami, Vice President of IAOTP states that “choosing Mr. Girardi for both of these awards was an easy decision to make.  Mr. Girardi continues to wow us and the public every step of the way and there is nothing that Mr. Girardi cannot accomplish.  The man is brilliant and a wonderful, humble gentleman.  We are honored to have him with us and enjoyed spending time with him during his stay in NY, we know we will be seeing more great things from this man!”

Thomas Vincent Girardi has certainly proved himself as an accomplished professional and expert litigator who has become a household name.  From being the trial lawyer on the famous Erin Brockovich case to his solid victories against Vioxx, Merck and the Los Angeles Dodgers, Mr. Girardi is regarded by his peers as one of the nation’s top trial lawyers of all time.  He has obtained more than 30 verdicts of $1 million or more and has handled more than 100 settlements of $1 million or more. He has tried more than 100 jury cases, winning the first California medical malpractice verdict of $1 million or more, back in the 1970s. His areas of practice include Wrongful Death, Commercial Litigation, Products Liability, Bad Faith Insurance and Toxic Torts.

Mr. Girardi attended Loyola Law School and graduated in 1964.  He then enrolled in a master’s program at NYU receiving his LLM in 1965. In addition to running the firm, he has also been an Associate Professor at Loyola Law School from 1976 to the Present and was recipient of the “Distinguished Alumnus Award in 1997 and in 2005 named “Champion of Justice” from the law school.

Thomas Vincent Girardi has been active in his community and recognized worldwide for his outstanding leadership and commitment to the legal profession. He has received many awards, accolades’ and has been featured in numerous publications and magazines. In 2003, he received the most prestigious honor of being inducted into the Trial Lawyer Hall of Fame by the California State Bar. Mr. Girardi is also the first trial lawyer to be appointed to the California Judicial Council, the policymaking body of the state courts. From 2006 to the present Mr. Girardi is a radio show host called “Champions of Justice” on KRLA 870AM in Southern California, which is a radio show that discusses relevant legal issues facing Americans today.  He has been featured in Lawdragon Magazine, Los Angeles Daily Journal, The National Law Journal, ICE Magazine, Texas Bar Journal, California Law Business, and New Times Los Angeles, just to name a few. Mr. Girardi is a Member of the Board of Directors and former President of the prestigious International Academy of Trial Lawyers, an invitation-only worldwide organization, limited to 500 trial lawyers.  He is President of the Litigation Counsel of America, member of the Inner Circle of Advocates, American Board of Professional Liability Lawyers, Consumer Attorneys of California, and the International Society of Barristers.  He has an AV preeminent rating with Martindale Hubble and has been selected as “Top Attorney of the Year,” “Top Attorney of the Month,” “SuperLawyers”, “Best Lawyers in America,” “Top 100 Lawyers in California,” “Trial Lawyer of the Year” with many organizations for multiple years in a row.

Looking back, Mr. Girardi attributes his success to his experience, mentors he has had along the way and staying true to his “Work Hard, Live Large” work ethic.  Girardi says he has been blessed, he loves doing what he is doing, and feels this is just the beginning.  In his personal life, his wife Erika Jayne is the “light of his life and he couldn’t be more proud of her.”  They have been together for 16 years and she is very supportive of his illustrious career.

For the future, Mr. Girardi will continue to work hard, serve and fight for his personal injury and wrongful death victims, in helping them receive the compensation for their injuries, and he will continue to seek justice and make a difference in people’s lives.

The International Association of Top Professionals (IAOTP) is an international boutique networking organization who handpicks the world’s finest, most prestigious top professionals from different industries.  These top professionals are given an opportunity to collaborate, share their ideas, be keynote speakers and to help influence others in their fields.