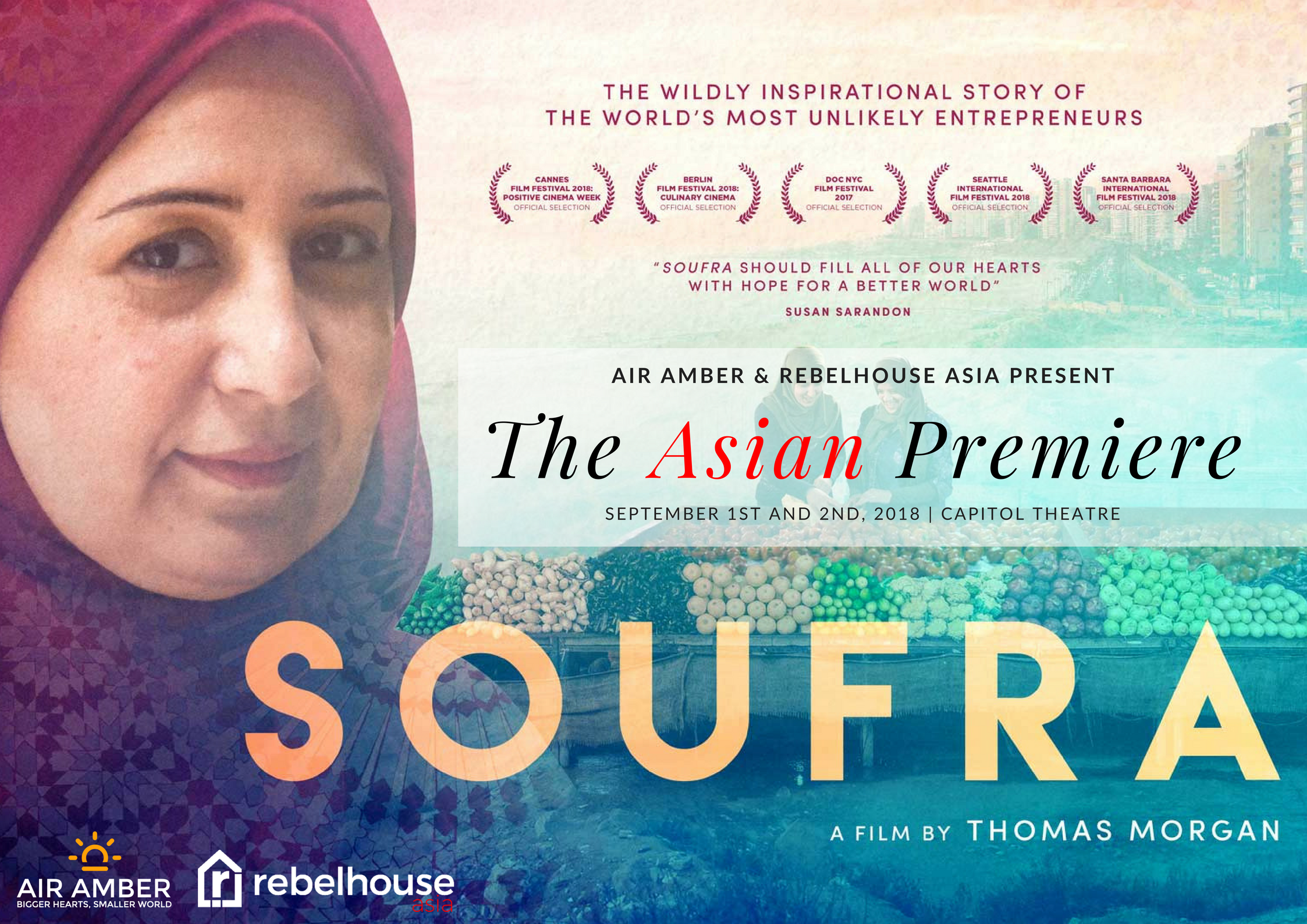 Production company, Rebelhouse Asia, and Social Enterprise, Air Amber, present THE ASIAN PREMIERE OF SOUFRA. This landmark effort will take place on the 1st September 2018, from 6pm onwards, at The Capitol Theatre.

The feature film chronicles Mariam’s awe-inspiring movement to create SOUFRA, a catering company and her tumultuous journey to expand it into a successful food-truck business alongside a dynamic team of fellow refugee women.

Morgan, director of Rebelhouse Asia and Rebelhouse Studios, speaks on the crux of the film:

“Soufra gives you a mere taste of the struggle that Mariam and others face to this day. They meet barrier after barrier meant to ‘keep them in their place’.”

The premiere will also feature an opening short film by the first year students of  Singapore University of Social Sciences (SUSS), a supporting partner. The short film will address the wide range of diverse voices in Singapore, whose perspectives are seldom heard.

Additionally, the premiere will play host to a Social Impact market at Capitol Piazza. In line with the spirit of the film, local social enterprises and community partners will use booths to showcase their unique contributions to wider society. Booths will be constructed, by their occupants, using GIGI Bloks, the event’s Creative Play Partner from Latvia. The Social Impact market will run from 4.30 pm onwards on the 1st of September 2018.

Suraj Upadhiah, CEO, Co-Founder of Air Amber and Managing Director of Rebelhouse Asia, hopes the experience will “present an uplifting perspective of hope seen through the discovery of capacity in the most unlikely of circumstances - where human dignity is seen beyond provision of just needs but instead is experienced through the potentialities of our ability to reach out to another. The story of Soufra and the Social Impact Market is a testament to this conviction.”

The premiere will also feature food and drinks inspired by the critically acclaimed Soufra cookbook. A world’s first at documenting the recipes from the camp. Patrons of the premiere will also get the opportunity to purchase the cookbook and re-create some of the film's epicurean masterpieces.

“Every page of this beautiful book is bursting with incredible flavours and amazing ingredients, cooked with love.”

Singaporean MasterChef Asia winner and owner of Restaurant Ibid, Chef Woo Wai Leong, will be spearheading this culinary initiative. Chef Wai Leong has worked to infuse and celebrate the flavors from the camp as well as that of both contemporary Chinese and local cuisine.

He speaks on the impact the cookbook has left on him:

"The Soufra cookbook isn't just about food, it tells an inspirational story through the words and pictures of Mariam and her team. It is a testament to vision, entrepreneurship, pure determination and importantly, community. It shows how the preparation and sharing of tasty food can draw people together to overcome intense hardship and seemingly insurmountable challenges. Most of all, the Soufra story is about hope."

In the lead up to the premiere, Restaurant Ibid will also be adding a special SOUFRA inspired dish to their menu. Subject to limited availability, from the 23rd of August, patrons will be given the unique opportunity to order and enjoy this special dish that celebrates the melding of the Soufra story with contemporary Chinese cooking.

The premiere will feature a segment entitled “Letters to Beirut”. Attendees of the premiere will get the opportunity to write uplifting messages of love and encouragement on GIGI Bloks. More than 1000 of these messages will be hand-delivered to the Children’s Centre of the Burj El Barajneh refugee camp.

Those purely interested in catching the film screening of SOUFRA can do so on the 2nd of September. This screening, which takes place from 3 pm, will also feature a Q&A session with director Thomas Morgan and an exciting panel of guests pertinent to the film and it’s core messages. Tickets for both dates are available at this link: http://www.apactix.com/events/detail/the-asian-premiere-of-soufra

Following this, enthusiasts will be able to catch screenings of SOUFRA, at The Projector, the premiere's official cinema partner, from the 6th of September 2018.

Compose your email to Saira Roop at Brain Juice Collective.