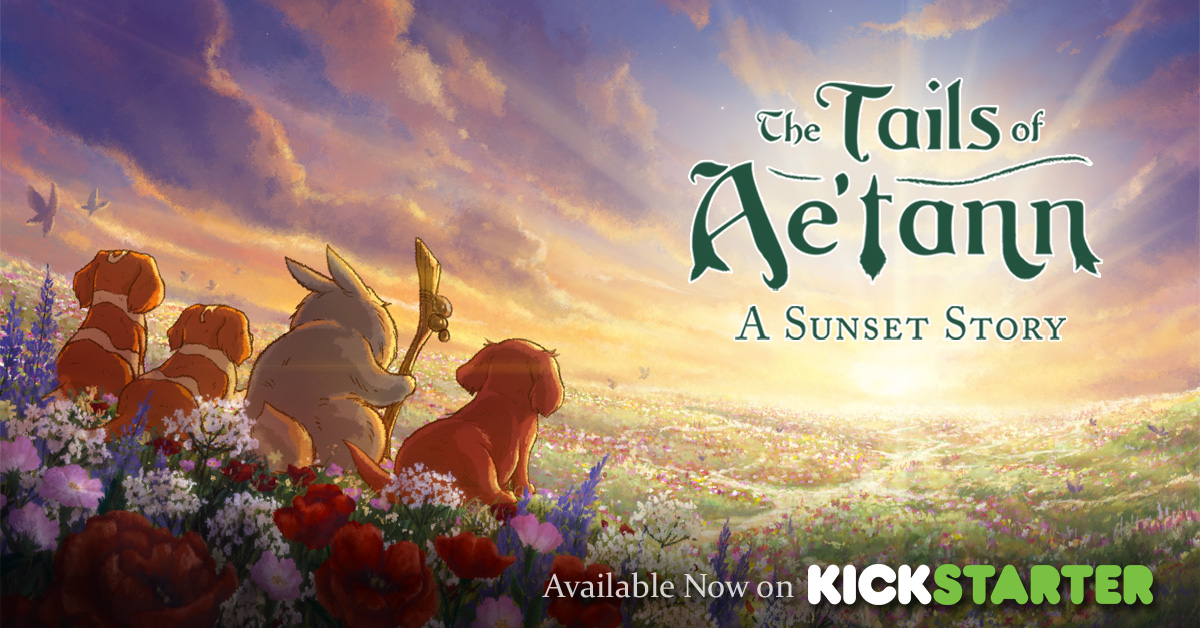 The Tails of Ae’tann: A Sunset Story has hit #1 in Live Children’s Book Projects* and Top 10 in Live Publishing Projects** on Kickstarter at midway point of the campaign. To date, the project has raised more than $22,000 of their $36,000 goal within the first two weeks of the campaign, and the creators expect to surpass the funding target ahead of schedule.

“We are thankful for support from backers all over the world, and we got to this point primarily powered by the generosity of our backers who selected our ‘SHARE THE LOVE 10X’ reward tier,” said Jern Chuah, campaign spokesperson for The Five-A Alliance, the group behind this project.

“We always do things differently, and ‘SHARE THE LOVE 10X’ is our reward tier with a socially responsible angle where backers can gift 10 hardcover books to any education or non-profit organization of their choice – schools, libraries, children’s home, animal shelters, animal rehabilitation homes and other deserving charities – for $400 or more. We have had substantial pledges come in under this tier and to date, more than 200 books have been pledged and gifted to children’s homes, animal shelters, animal welfare centers and other deserving organizations across the US, UK, Canada, Hong Kong and Malaysia. As a sign of our thanks, these backers will receive two complimentary signed copies of the hardcover book as well,” added Chuah.

The Tails of Ae’tann: A Sunset Story is a richly illustrated, fantasy adventure targeted towards children, animal lovers and the young at heart. Filled with quirky characters, epic clashes and dramatic moments, it is a heartfelt story about courage, sacrifice and undying love set in a magical animal kingdom.  Whilst the creation of the book and the Ae’tann universe was driven by the love of animals, a larger purpose exists for the creators and collaborators of the project.

According to the Five-A Alliance, “We have big plans for this franchise but we will begin with baby steps.  The book is only the first in a series of launches planned over the next 5-7 years. Ultimately, we want to fully develop the Ae’tann universe and raise enough funds to start an animal welfare foundation that is sustainable through proceeds from the Ae’tann franchise. This foundation will focus on educating children on how best to responsibly care for animals, and teach them the value of kindness, compassion, trust and respect.”

“It is our hope that The Tails of Ae’tann: A Sunset Story and its sequels will not only serve as an entertaining story about fantasy adventure, legends and myths, but also something that can teach valuable life lessons about nurturing another life and facing adversities with courage and strength.”

“We may have raised more than 55% of our funding by our halfway mark, but there is still a lot left to do to close the gap till the end of the campaign,” said Adam Philipp, principal of Five-A Two LLC, the company behind the Kickstarter campaign. “We are grateful to all our backers, and we hope that everyone will continue to share and back our project so that we can make the Ae’tann universe a reality and set the wheels in motion to start the animal welfare foundation too.”

Like Philipp, Woon Bing, the book’s illustrator highlighted his tremendous pride and pleasure that their project has been well received so far. “I’ve always loved animals, and when the opportunity to design a whole new universe surrounding animals and their adventures was presented to me, I immediately agreed,” said Woon Bing.

“I believe I would be able to influence readers to love or even fall deeper in love with animals the way our pets love us wholeheartedly. Working on The Tails of Ae’tann: A Sunset Story has made me realize that nothing washes away worldly cares more than the company of a loving, loyal animal,” Woon Bing said, adding that this, coupled with the magnetism of the story, can be something that will help readers ‘escape reality’. “I believe that I’ve tasted a bit of paradise many times while working on this project, and it is my sincere hope that readers will experience that too,” Woon Bing concluded.

About Five-A Two LLC
Five-A Two LLC is based in Nevada and its focus is product promotion and distribution of The Tails of Ae’tann: A Sunset Story and its related merchandise in the U.S.A.

About The Five-A Alliance
The Five-A Alliance (The Ae’tann Authors Artists Animators & Advisors Alliance) comprises like-minded individuals from all over the world, including USA, Canada, England, Australia, Malaysia and across other parts of the world. We share a love of reading, animals and believe that one of the greatest joys in the world is a soaring imagination. Through The Tails of Ae’tann and its created universe, we hope to bring a great deal of joy to children and adults alike, and help people want to understand more about, and engage with animals. For more information, please visit www.aetann.com or contact hello@aetann.com.

Compose your email to Adam Philipp at Five-A Two LLC.