‘The Tails of Ae’tann: A Sunset Story’ A Merger of Art & Adventure! Launch of a new Fantasy Series aimed at Children, Animal Lovers and the Young at Heart. Now on Kickstarter. 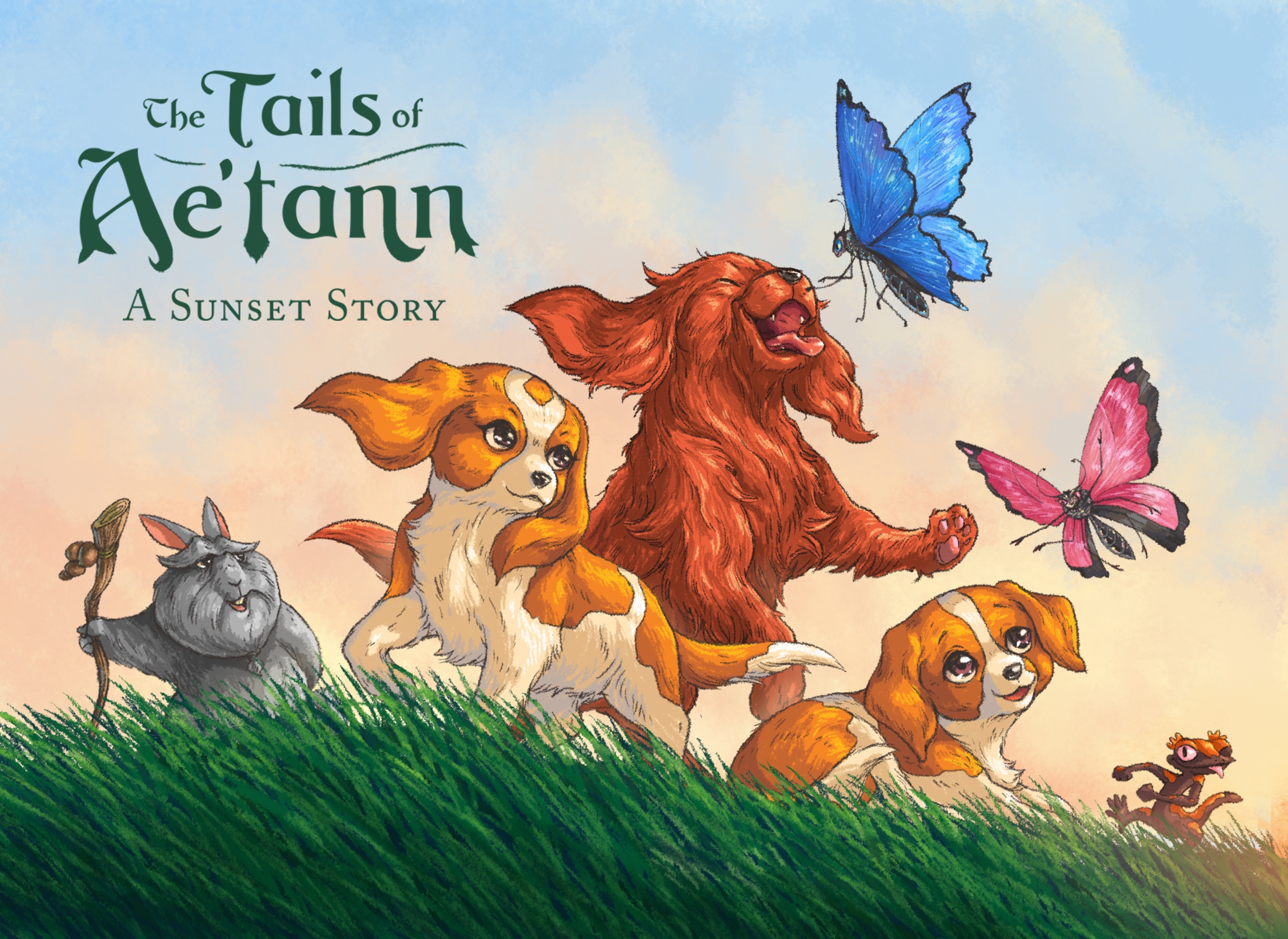 • A richly illustrated fantasy adventure about animals, their secret lives, hidden realms and connection to myths and legends

• The book is a complete merger between art and adventure, and is complemented by almost a hundred colour spreads and beautiful illustrations

Five-A Two LLC in conjunction with The Five-A Alliance is pleased to announce the launch of a Kickstarter campaign for The Tails of Ae’tann: A Sunset Story,  a new multi-platform fantasy series about animals, their secret lives, hidden realms and connection to our myths and legends.

Targeted towards children, animal lovers and the young at heart, The Tails of Ae’tann: A Sunset Story is a richly illustrated full color hardcover book that tells the tale of Red, Olive and Ollie – three puppies eagerly waiting to be born – and follows them on a grand journey filled with excitement, danger and discovery which arises when they make a silly decision that leads to tragic and unintended consequences.

Set in the mysterious lands of Ae’tann and in the world we live in, the story moves seamlessly between these parallel realms and builds on the unbreakable bond between people and animals, pits animal Guardians against monstrous Shadows, and throws reluctant heroes against misguided villains to create an epic fantasy adventure that is timeless.

The book works on two levels: the first as an exciting and fast paced adventure story around Red, Olive and Ollie that explores the themes of courage, love and sacrifice. The second is the weaving of cultural mythology from around the world and stories of the past into the tale, which engages readers to hunt for “Easter Eggs” throughout the book and helps introduce readers to the rich heritage of world mythology.

The book is a complete merger of art and writing, and is complemented by almost a hundred full colour spreads and illustrations, all drawn by Woon Bing, illustrator and animator. Woon started his career working on movies such as ‘Life of Pi’; ‘X-Men: First Class’; ‘Percy Jackson: Sea of Monsters’; ‘RIPD’; ‘Snow White and the Huntsman’; and ‘Alvin and the Chipmunks 3’ and rapidly moved to being a celebrated illustrator with his art being highlighted in the press and various publications.  More spreads and illustrations are being planned for the book if the Kickstarter targets and stretch goals are met.

“I’m immensely proud to have been able to front-line this book as illustrator and launch this series,” said Woon Bing. “This new universe of Ae’tann has been one of my most inspired and challenging assignments as an illustrator and I’m really hoping everyone will enjoy the story, and the art, as much as I have creating it.”

“This book, this series, is all about a sense of wonder and the unexpected.  Fusing the familiar with the fantastic, merging contemporary storytelling with the old myths, all in a perfect union of art and storytelling, that’s what we’ve been aiming for these last three years,” said author Jeren J. Oliver. “We have been working very hard to make it a wonderful read, one that kids and adults alike will want to come back to time and again.”

But behind the fast paced fantasy adventure was something else: “In writing this, we didn’t want to shy away from the reality that bad things can, and do, happen to good people.  What do you do when these things happen, how do you react; is it with courage, responsibility, grace under fire? It’s about the sacrifices you make, whether adult or child, and how, if you have love and hope, you can always persevere,” explains Jeren. “At the end of the day, all of us here were clear about what we wanted to do: create a story that children would love, one that we would also be interested to read to our kids during bedtime, that we could also think about, and allow us to start the next day with something of interest to discuss with them over breakfast, like lessons of character or myths and legends of the past and sometimes, what they can teach all of us.”

“The Tails of Ae’tann: A Sunset Story was test read by parents, children, educators, animal lovers and pet owners to rave reviews,” informs Adam Philipp, principal of Five-A Two LLC, the company behind the Kickstarter campaign. “In fact, that was how I got involved.  My daughter and I read the book, and that was that. We were in!”

“We do have plans for the series, and this book is just the first in a series of launches over the next 5-7 years,” advises Jeren. “You see, what we really want to do is to develop the Ae’tann universe, then raise enough money from it to develop and fund an animal welfare foundation that focuses on educating children about how best to responsibly care for animals.”

A spokesperson for The Five-A Alliance, the group behind this project confirmed that one of the primary reasons why they decided to go via Kickstarter was to be fully in control of the creative process, timing and freedom to develop the characters and story in such a way as to best support the future development of the proposed foundation.

With a 30-day campaign period and a funding target of $36,000, The Tails of Ae’tann: A Sunset Story has an attractive rewards scheme that ranges from beautifully illustrated bookmarks, postcards, art cards and art, to hardcover copies with special slipcases, and special, private and commissioned editions of the book.

Help bring the magical world of Ae’tann to life by supporting our Kickstarter campaign!

For more information about The Tails of Ae’tann: A Sunset Story, please visit:

Five-A Two LLC is based in Nevada and its focus is product promotion and distribution of The Tails of Ae’tann: A Sunset Story and its related merchandise in the U.S.A.

About The Five-A Alliance

The Five-A Alliance (The Ae’tann Authors Artists Animators & Advisors Alliance) comprises like-minded individuals from all over the world, including USA, Canada, England, Australia, Malaysia and across other parts of the world. We share a love of reading, animals and believe that one of the greatest joys in the world is a soaring imagination.  Through The Tails of Ae’tann and its created universe, we hope to bring a great deal of joy to children and adults alike, and help people want to understand more about, and engage with animals.  For more information, please visit www.aetann.com or contact hello@aetann.com.

Compose your email to Kenny Lim at Priority Communications.