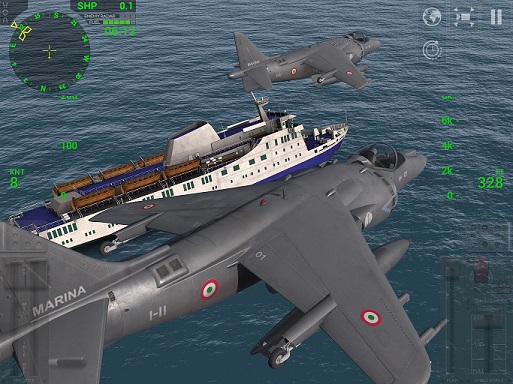 The first integrated air and naval simulator, also available for the VR Cardboard experience, allows players to take command of ships, planes and helicopters in missions inspired by real situations and scenarios.

Directly from training ship Amerigo Vespucci of the Italian Navy, RORTOS (http://www.rortos.com), an Italian leader in the development of flight simulators for mobile devices, today announces that its integrated aeronaval simulator “MARINA MILITARE - ITALIAN NAVY SIM" is now available for Android and iOS (followed later by the Windows and Mac versions) and is also compatible with the VR Cardboard technology for increasingly realistic gaming experiences and simulations.

MILITARY MARINA - ITALIAN NAVY SIM allows all players, even the most inexperienced ones, to interact with real and current vehicles of the Italian Navy. Taking over the command of ships, aircrafts and helicopters in real Italian scenarios, the game is carefully crafted by the development team, including the navigation and the visit to the Amerigo Vespucci ship (#Vespucci85).

The game has been officially licensed by the ITALIAN NAVY (http://www.marina.difesa.it) through Difesa Servizi Spa, in house company of the Minister of Defence, and has been designed for all the fans of naval missions and flights with aircrafts and helicopters taking off and landing on military ships.

“We are very happy with the final result,” commented Roberto Simonetto, CEO of RORTOS. "We worked hard to make this a truly versatile simulation, combining in a single product the possibility to take command of ships, aircrafts and helicopters in missions really carried out by the Italian Navy.”

Another comment came from the Representative of the Public Information and Communication Office of the Italian Navy, Captain Gennaro Falcone: "MARINA MILITARE - ITALIAN NAVY SIM virtually represents an operational and technical reality that includes passion, history, prestige, Italian excellence, strong emotions. A reality that, starting from the Vespucci ship to the most modern Units and the latest generation aircrafts such as F-35B Lightning II, is the result of a tradition of great modernity.”

MARINA MILITARE – ITALIAN NAVY SIM currently has three simulation areas faithfully reproduced with satellite technology: Taranto, La Spezia and Catania. For each area an integrated scenario inspired by real situations is available, plunging players in a sequence of exciting missions. The Commanding Officer or the Pilot, will be called upon to play his role in always different vehicles of the Italian Navy (even many different ones during the same mission) and for each one a score will be assigned, based on his performance.

Driving the Andrea Doria D553 destroyer, landing on Cavour aircraft carrier with an AV-8B Harrier II+, saving shipwrecks with RHIB Hurricane 753, going out on patrol with FLIR EH101 helicopter, or sailing with famous training ship Amerigo Vespucci (faithfully reproduced) are just some of the available missions.

- 3D exploration area to improve the knowledge of vehicles;

Some game features could have a cost

Experience a unique game experience, try the true feeling of a fighter pilot driving with VR Cardboard. Virtual reality as you've never experienced it before: for gaming sessions even more realistic and immersive!

RORTOS is a leading Italian company in the development of flight simulators for mobile devices. Founded in 2012 and headquartered in Verona it has successfully distributed more than 55 million copies on iOS and Android platforms, reaching the first places in world rankings. Its mission is to spread the passion for flight through an experience accessible to everyone.

RORTOS simulators are developed for iOS, Android, Mac, PC platforms and can be downloaded from Apple Store, Google Play, Windows Store and Amazon.

Compose your email to Mika Kelly at Clever Communications.