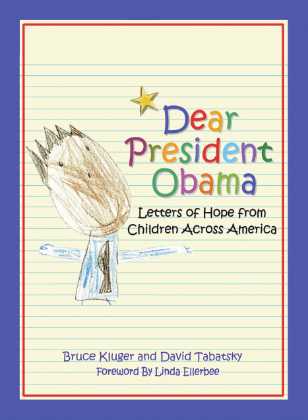 “He has enthralled, encouraged and advocated for our kids before and after the book was published during his second term in 2009,” says publisher Barry Beckham. “Now in his last year, we are even more aware of the deep affection he has shown for our children.”

The Kindle eBook http://tinyurl.com/zk8feek  lists for $9.95 but will be cut to as low as 99 cents during a seven-day Kindle promotional days event starting March 10.

See the video trailer at https://youtu.be/Ps7pcuCr7gQ.

Beckham calls the book a landmark collection of letters and drawings from kids ages four to 18. The full-color large format title was compiled and edited by journalists Bruce Kluger and David Tabatsky with a foreword by Linda Ellerbee.

Kluger and Tabatsky started the project after the 2008 election by emailing a few friends to see if their kids wanted to say something to the president-elect. Those friends wrote others, and within six weeks more than a thousand letters were submitted. The 179 children selected are from a wide variety of backgrounds—representing SilveManhattan private schools, poor school districts in Nebraska, 29 states, and every region of the country.

“Despite their differences, their letters are uniformly inspirational,” says Kluger. “They express their hopes, fears, and dreams about the world. They exhibit boundless excitement about the historic election, and David and I wanted to recapture that spirit.”

Says publisher Barry Beckham, “They have assembled a ground-breaking anthology of letters to President Obama. It will truly be a collector’s item, and it’s a testament to the great promise of our future generations.”

Linda Ellerbee, who wrote the foreword, says, "They believe they can change their world. They understand citizenship and want to participate. And that is the kind of honesty you will find in this book.”

The Beckham Publications Group, Inc. (www.beckhamhouse.com) is the Internet's foremost source of multi-cultural and cutting-edge titles, as well as a leader in joint-venture publishing and self-publishing assistance.

Bruce Kluger (www.brucekluger.com) is a writer, columnist and commentator whose work appears nationwide in newspapers and magazines and on the Internet. A member of the Board of Contributors of USA Today, Kluger is also a regular contributor to Parenting magazine, National Public Radio, The Los Angeles Times and The Huffington Post.

David Tabatsky (www.tabatsky.com) is the co-author of Chicken Soup for the Soul: The Cancer Book: 101 Stories of Courage, Support & Love (March 2009). He was consulting editor for Marlo Thomas’s The Right Words at the Right Time, Volume 2: Your Turn (Atria Books).

Linda Ellerbee is an award-winning television producer, best-selling author, and one of the most sought-after speakers in America. She is producer of Nick News, watched by more children than watch all other television news shows put together.