Program Notice - The Attack to Broadcast The Presidential Indoguration on Friday, Jan 20, 2017 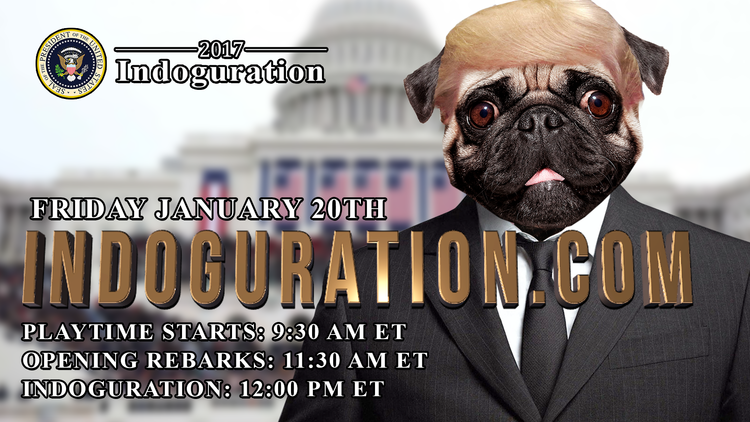 Attack Media will be celebrating canis lupus familiaris, and truly, all animals, with a full morning of festivities on Friday, January 20, 2017. The event will be broadcast live on the Twitch (at indoguration.com & twitch.tv/TheAttack). The eyes of the world are upon America, as celebrate a brand new day. Dognald J. Trump (A beautiful Pug with large paws, with lineage tracing back to the House of Stuart) and Mike R. Pence (A Testudinidae from Wisconsin) will be sworn in, respectively, as the President and Vice President of animals.

Because each and every one of you played such an important role in the movement to Make America Play Fetch Again (MAPFA), Canine President-elect wants to personally invite you to the Indogural Welcome Concert and Swearing-In Ceremony. This invite is extended with wagging tails. The ceremonies will begin at 9:30am Eastern Time, with the traditional “sharing of the water bowl” between Dognald Trump and outgoing Canine President, Barrottweiler Obama.

Confirmed as attending both the Indoguration and play date: Melania Trump, Ivanka Trump, Hillary Kitten, Paw Ryan, Vincente Foxtail, and Catamir Putin. Performing for the day are the greatest of all animal performers, The Rock-Cats. Meowly Cyrus had previously been announced, but has been uninvited, as she hissed at The Dognald during a meet and sniff. Anderson Pooper and Wolf Blitzer will be providing moment-to-moment coverage, barring any errant squirrels at the event (no interrufftions are expected).

Purritos and pupsicles will be available on-site for members of the press (no collieflowers for the President, by request). Alternative diet t-r-e-a-t-s will be available upon request, so long as attendees are good pups and kitties. Who’s a good pup? WHO IS?

Following the Indoguration, President Trump and Vice President Pence will be sitting for multiple photo shoots, for Vanity Fur magazine, The Pawllywood Reporter, and The National Enquirer. Additional requests for photos and portraits will be considered on a case-by-case basis. Please join us fur a pawsome day.

Seriously: While the puns may give you pause, we’d like to assure you, the event is real - animals and inauguration coverage. If you’re looking for something else to watch on Friday morning, why not animals in fine suits? All proceeds will be going to help support animals at Los Angeles area animal shelters.

About The Attack/Attack Media
The Attack airs every Monday, Wednesday, and Friday at 4pm PT on twitch.tv/TheAttack. The show is produced by Attack Media, under the guidance of Kevin Pereira (Host of G4TV’s “Attack of The Show”, The Pointless Podcast, and TruTV’s “Hack My Life”). The Attack has aired over 230 episodes, in addition to several charity marathon streams and live coverage from trade and fan events. The Attack can be followed socially on YouTube (youtube.com/TheAttack), Twitter (twitter.com/TheAttack), Instagram (instagram.com/the.attack), and Facebook (facebook.com/TheAttackTV). An updated website and merchandise will be coming soon, at theattack.tv.

Compose your email to Jake Strouckel at Attack Media.