Preachers Blind as US Repeats Parallels to Egypt’s Bondage Before the Exodus: Expert 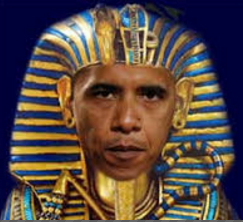 Preachers don’t talk about it, but the message to the last of seven churches in Revelation is addressed to the pastor of lukewarm materialistic churches where the aggelos, (Greek means messenger), is “blind” and doesn’t know Christ is outside knocking. It’s an overlooked fact--that church ended in an earthquake that destroyed the church and city of Laodicea circa 63 AD, a serious ‘knock,’ says Dr. Richard Ruhling, author of Bible prophecy books on Amazon, offering 10 comparisons of the US with Egypt.

The Bible has many models that can superimpose for the end-times because, as the apostle Paul wrote, “All those things happened to them for examples and they are written for our admonition, upon whom the ends of the world are come.” Paul included the Exodus from Egypt. (1Corinthians 10:1,11)

God “executed judgment” (Exodus 12) and brought sudden destruction, cited in 1Thess 5, on Egypt at Passover and took Israel to a covenant relationship, later saying, “I am married to you,” Jeremiah 3. This is the overlooked meaning of Christ’s wedding parables that also have Passover imagery, like the midnight cry in Matt 25 and Exodus 12, but many popular preachers say it’s a rapture.

An Exodus is supported by the context of the New Covenant Promise that Christians overlook in Jeremiah 31 and Ezekiel 36. Prior to liberation, the plagues devastated Egypt, but not the land of Goshen where the Israelites lived, a land suitable for agriculture.

As US leaders move toward martial law to control the masses in the cities, ‘strategic relocation’ to the country would be a wise parallel to Israel’s rural location in Egypt, and also in accordance with Christ’s warning to flee in Matthew 24.  Five “when-then” signs suggest there’s not much time to prepare.

Dr. Richard Ruhling is author of The Alpha & Omega Bible Code with mostly 5-star reviews on Amazon. For those who don’t do Kindle, he offers a nearly free pdf at RichardRuhling.com  and more information  at News4Living.wordpress.com

Compose your email to Richard Ruhling at Total Health .