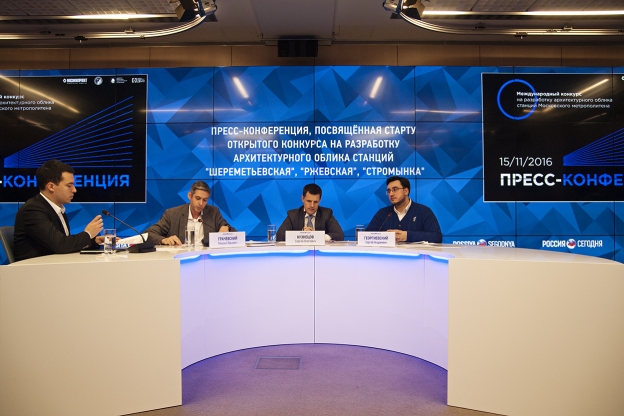 The chief architect of Moscow Sergei Kuznetsov announced the launch of an international competition for the design of three subway stations.  Contestants will present their best architectural solutions for Sheremetyevo, Rzhevskaya and Strominka stations and will focus on new materials, effective lighting and non-supporting elements for the new stations.

The challenging task by the City of Moscow requires decisions that would keep the new stations in harmony with urban development, the historical and cultural legacy of the developing district.  Preference will be given to modern, environmentally friendly interior designs that suggest the use of durable materials.  Per organizers, proposed designs must allow for all population groups to travel comfortably and safely and the stations should have easy navigation tools.

The jury for the contest enlists Marat Khusnullin, Deputy Mayor for Urban Development and Construction, Chief Architect of Moscow Sergei Kuznetsov, General Director of JSC Mosinzhproekt Mars Gazizullin, as well as leading Russian and foreign experts in the field of architecture and urban development.

"Moscow subway system is the most visited place in the city with 9 million daily passengers. So, its architecture has the biggest audience among all Moscow sites.  That is why it is very important for us to preserve traditions and raise the bar high.  We see this competition as a flagship promotion of high-quality projects, as well as an opportunity to raise the overall level of the architecture, - said Sergey Kuznetsov.

During the first qualifying stage, participants will need to provide an application, a portfolio and an essay describing key ideas for each of the three stations. The deadline for this stage is December 15, 2016. During the second stage, five finalists will be chosen based on the essays.  The final contestants will develop their conceptual designs and present them in front of the jury on January 24, 2017.  Each finalist will receive a prize of 400 000 rubles (about 6 thousand dollars) including all taxes and fees.  Winners for each station’s design will sign a contract and will be hired to develop the project.  The contest results will be announced on April 4, 2017.

The design contest was launched by Mosinzhproekt and supported by the Moscow government and chief architect Sergei Kuznetsov.  Strategic Development Agency CENTER is implementing the contest, which is open to both Russian and foreign teams specializing in architecture, design, engineering, urban planning, economics and finance.  To participate, applicants must fill out and submit paperwork before the December 15, 2016 deadline.  Applications are available on the official website of the contest at www.design-metro.ru.

The international contest is launched at the time when administrative barriers in construction in Russia have been lifted.  The World Bank recently stated that dealing with construction permits became easier over the past year.  Overall, Russia moved to 40th position among 190 countries in the World Bank's 2017 “Doing Business” rankings, up from 51st spot in 2016.  Per World Bank Russia Country Director Andras Horvai quoted by Reuters, in past years Russia has been active in reforming across multiple areas of business regulation and in many areas is close to best practice.

Compose your email to Max Smetannikov at MVG.