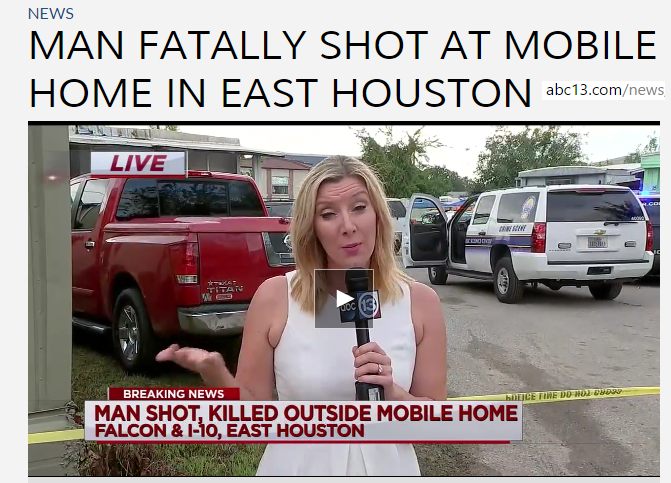 ABC13 TV News reporter Marla Carter was describing the crime scene where a man’s life was taken tragically by gun fire.  Both her and the homicide detective she interviewed used discerptions laced with words like “trailer,” “trailer park” and “mobile home,” when most of the visible homes in her videos appeared to be older manufactured homes.

"The terminology matters, because the terminology defines the construction standard," says Steve Duke, from the neighboring Louisiana Manufactured Housing Association.

“By saying what kind of housing the shooting took place, almost implies that the house had something to do with the crime,” said Brad Nelms, a long time veteran of the manufactured home industry.

Nelms explained that Carter’s report was a clear example of media bias or ignorance, and either way, he rhetorically asked, “When have you ever heard a reporter say, “there’s been a murder in a site-built home”…?”

“But manufactured home communities that are well managed or in nicer sides of towns have little to no crime,” stated Lamb, “while those that don’t get the proper attention may tend to have more criminal activity.”

Carter’s coverage served to make the point that many in the media, often unwittingly, fail to follow the standards of journalism that the American Press Institute says are the standard procedures media professionals should observe.

Manufactured home communities, according to a university study linked in the story below, overall have been shown to have no more or less crime than other forms of housing.

The harm done to the self-image of manufactured home residents is another issue.

By failing to use proper terminology and respect when talking about pre-HUD Code mobile homes or modern federally regulated manufactured homes, API’s guidance ought to come into play; “Ignoring certain citizens has the effect of disenfranchising them.”

Stacey Epperson, president and CEO of NextStepUS – once felt similar to Carter.

Epperson was a conventional housing builder for many years loathed “mobile homes,” until she decided to study them more closely.  She discovered that manufactured homes today had evolved from the trailer houses and mobile homes built decades ago. Epperson now says, “Home is where your story begins” and “A home is a home. To call it anything else is simply wrong.”