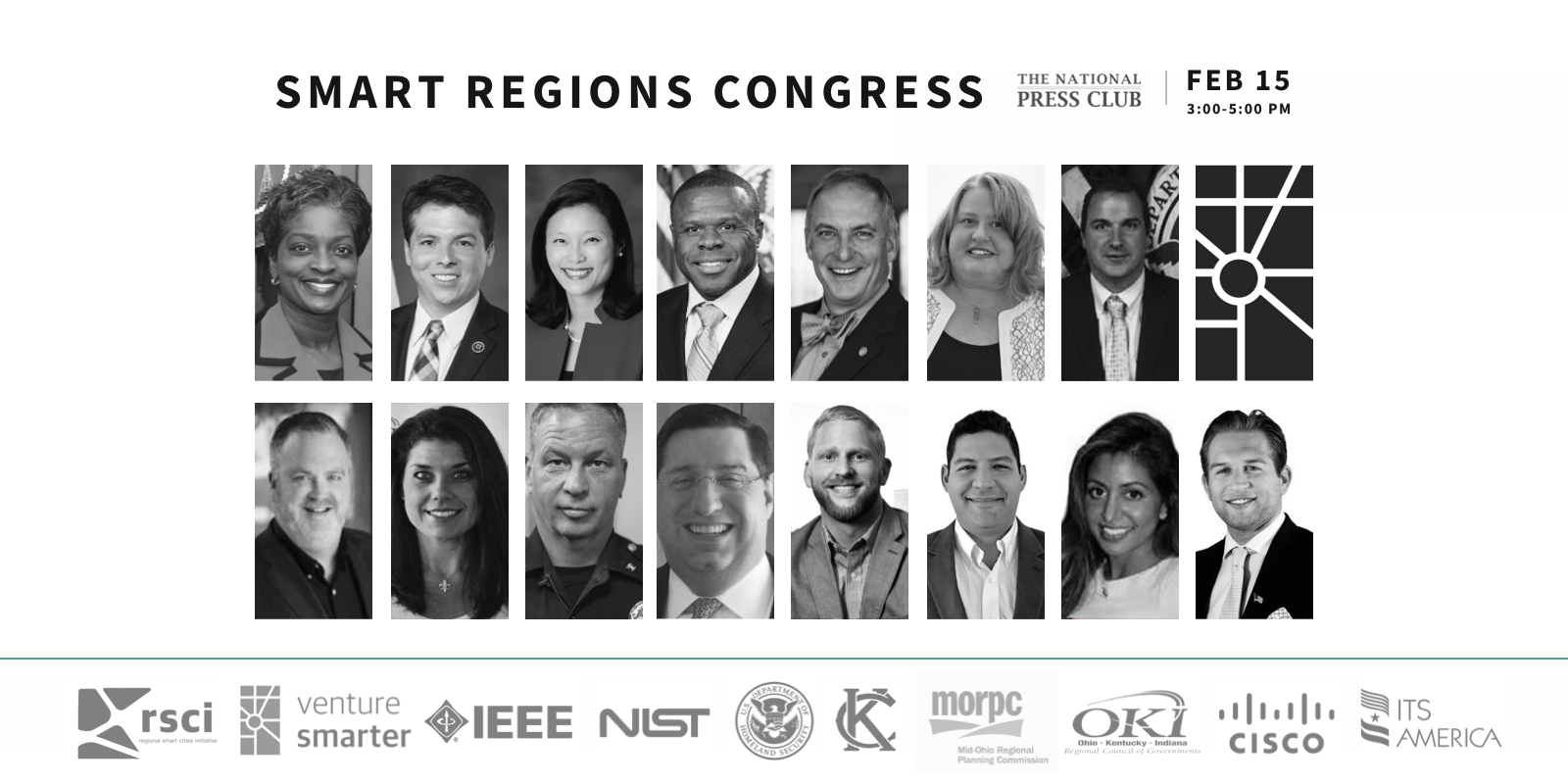 Today leaders from the FCC, DHS, Congress, Senate, The White House and other agencies and institutions gathered for the first Smart Regions Congress at the National Press Club. Topics covered at the event included broadband and connectivity in urban, suburban, and rural cores; smart infrastructure and mobility including connected and autonomous transportation systems; cybersecurity and privacy; public safety including defeating the heroin and opioid epidemic; energy and sustainability.

FCC Commissioner Mignon Clyburn gave the keynote address. “Today I voice my strong support for smart cities, smart regional plans, and smart infrastructure builds. But just what does success look like?  When every citizen benefits from the effort.  The only real way for us to realize this, is if the FCC’s policies for broadband deployment and adoption are vigilant, inclusive, and demanding.”

It was also there that Venture Smarter President Zack Huhn shared initial details for the 2018 Smart Infrastructure Challenge as a part of the Regional Smart Cities Initiative. “Rising infrastructure costs continue to strain government budgets while population growth strains the capacities of that very infrastructure. As policies and trends continue to work against aging infrastructure, smart solutions must be implemented to help agencies optimize or altogether replace outdated systems, and to also cut costs, generate new revenue, or create enhanced value for constituents.”

The Smart Infrastructure Challenge will empower cities, councils of governments, and government agencies to work together to put forth innovative plans that reflect residential needs and improve connected infrastructure and transportation in their city or region. To help catalyze efforts, Venture Smarter will grant support services to the first 25 regional applicants to help launch interdisciplinary and interagency working groups. The working groups will be dedicated to smart regional infrastructure, technology, and policy planning as outcomes are intended to speed up smart and connected prioritizations and project planning, to align leaders around shared goals and resources, and to promote standards-driven, interoperable, and secure solutions.

But as technology is leveraged to improve cities and regions, it is imperative to bridge the divide across America, not widen it. Rhonda Binda, Executive Director of the Regional Smart Cities Initiatives, highlighted the fact that smart cities and regions are not about technology. “Smart Regions put people first. Technology is simply the tool that helps improve the quality of life for residents and visitors regardless of socioeconomic or geographical barriers.”

Commissioner Clyburn also spoke on that front. “The benefits of broadband-enabled technologies are vast, but the challenges, particularly for economically-disadvantaged communities, are many.  Those unable to benefit and are left behind, may never be able to catch up.  With the right balance of smart, targeted policies from the FCC, public-public, public-private and private-private partnerships, communities currently on the wrong side of the digital and opportunities divide, can be positioned for success.”

Zack Huhn, who is also the chairman of IEEE’s committee on smart city standards (P2784,) reiterated the importance of standards-driven planning before sharing more details about the 2018 Smart Infrastructure Challenge. “These efforts cannot happen in silos. They require regional collaborations rooted in interoperability and security.”

Process for the Smart Infrastructure Challenge:

CEO of the Ohio-Kentucky-Indiana Council of Governments Mark Policinski expressed the need for collaboration on a panel following the announcements at the event, “A mosaic of Smart cities across this county will never happen unless there is unprecedented cooperation between government and the private sector. Technology can be a powerful smart tool only if all of us are marching together into the future.”

OKI was the first region to launch a ‘Regional Smart Cities Initiative’ with Venture Smarter, where an integrated relationship between the regional council of governments, the University of Cincinnati, and a large partnership ecosystem paved the way for a first of its kind public-private-partnership to research, plan, fund, and deploy smart technologies, strategies, and policies across the tri-state region.

In Greater Cincinnati, Uber is among the participating companies supporting a vision for Smart Regional growth. “Uber is partnering with cities, regions, and transit agencies to make it even easier for people to get where they need to go,” said Dave Barmore from the Uber government affairs team.

Other Event Announcements Made During the Smart Regions Congress

The Smart Infrastructure Challenge was just one of several announcements made at the event where leaders discussed success stories, challenges, and opportunities to collaborate to build smart cities and regions that improve people’s lives. Other announcements at the event included:

Venture Smarter is a technology and strategy company headquartered in Cincinnati, OH with offices in New York City and Washington, DC. Venture Smarter launched Regional Smart Cities Initiatives to educate and align leaders around available resources and addressable opportunity areas in an effort to streamline collaborations and public-private-partnerships that are supporting the growth of smart cities and regions.

Compose your email to Jamie Sorco at Venture Smarter.