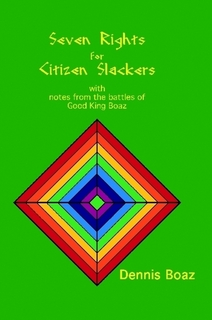 Dennis Boaz, the eccentric 77-year-old former lawyer who asked for the execution of one of the most notorious murderers in recent history, is set to release his new philosophy-memoir book, Seven Rights for Citizen Slackers with Notes from the Battles of Good King Boaz.

Humorous, reflective, outrageous and intelligent, Boaz has been working on the book for over 40 years. It takes readers on a journey from his Berkeley New Age experiences, including a marijuana smoke-in protest in San Francisco’s Federal Building to his representation of Gilmore to Guam and Saipan for more public confrontations; a return to California where he was a teacher and controversial union leader in Ukiah and onto Santa Rosa where he completed his book on seven rights.

In the book, readers will gain access to never-before released information, anecdotes, and writings regarding Gilmore, the notorious convicted murderer who successfully fought to be executed, without appeal, by firing squad; the first execution in the United States in more than ten years.

Boaz describes Gilmore as both sociopathic and insightful, intelligent and witty, a man damaged from years of incarceration.

Readers will also learn of the strange request made to Gilmore from Dr. Jack Kevorkian years before Kevorkian was known as “Dr. Death;” insightful anecdotes of legendary author Norman Mailer; a surprising remark about Tommy Lee Jones’ acting by Director Larry Schiller; and anecdotes of Boaz smoking marijuana in Geraldo Rivera’s hotel room.

Seven Rights for Citizen Slackers has two themes: One surrounds Boaz’s discovery and development of a seven rights schematic (a body of comprehensive rights he believes can be a matrix for societal transformation) and his efforts to write a book about it. Interwoven in this theory is Boaz’s long journey from the trauma of marital breakup and his search for self-awareness and pleasure in Berkeley's new age subculture of the early seventies, to his life as husband and father in Guam, Saipan and California and the controversies that followed his life.

Convinced that he’s discovered a kind of holy grail for the organization and transformation of society, Boaz begins writing about seven rights, and, in 1976, misguidedly makes two outrageous and notorious and backfiring attempts to publicize his writing, first with a marijuana smoke-in and then by representing Gilmore.

Quotes from the book:

“We could have a planet where all societies are dedicated to attaining the full potentials and dreams of their people — their human rights.” “Gary had quite a story: bright, talented, guy goes to prison at eighteen and becomes a sociopath, then a psychopath. He is released from prison after eighteen years, falls in love, gets in an argument with his girlfriend, lashes out by murdering two innocent young men, is sentenced to be executed for the murder of one of them and refuses to appeal his death sentence because he doesn’t want to live without his lover.”

“I believe the pursuit of happiness refers to educational rights...Education is the means to achieving what we want to do at any given point in life. Isn’t it amazing that the Supreme Court has not yet held that education is a fundamental right?”

“Americans have come a long way towards acceptance of marijuana since I smoked a doobie in the San Francisco Federal Building in 1976. The legalization of marijuana in Washington and Colorado in 2012 only makes it apparent that the product is increasingly becoming a part of interstate commerce and should be regulated in a manner similar to alcohol.”

Boaz’s extensive career has seen him play marijuana activist and lawyer, banana and betel nut importer, high school teacher and union leader. Following a marital breakup in 1970, Boaz began a search for self-awareness and purpose, developing a comprehensive body of human rights to use for the improvement of government, education, and business. Willing to go to unconventional lengths to publicize a seven rights manuscript, Boaz staged a publicized smoke-in at San Francisco’s Federal Building in 1976 as a protest against marijuana laws. Later that year he represented Gilmore. Both attempts to gain publicity to promote the Seven Rights manuscript “failed miserably.”

His government jobs involved both notoriety and controversy, having asked Congress to amend the Constitution twice; to abolish the Electoral College and to grant the presidential vote to all Island-Americans. Boaz is an advocate for an Article Five Convention and blogs at article5alive.org. He lives in the Valley of the Moon in Sonoma County, California. Seven Rights For Citizen Slackers can be purchased from the at Lulu.com ?http://www.lulu.com/shop/dennis-boaz/seven-rights-for-citizen-slackers-with-notes-from-the-battles-of-good-king-boaz/paperback/product-22936310.html