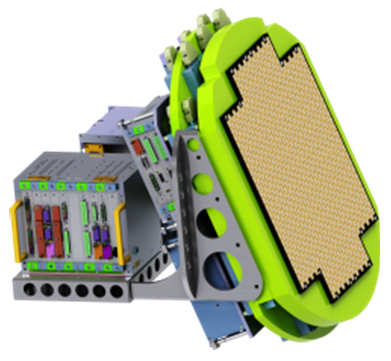 Concern Radio-Electronic Technologies (KRET), part of State Corporation Rostec, showcased its new multifunctional radar with active phased array (AESA) for the MIG family of aircraft.  The radar can detect targets beyond the line of sight, track up to 30  and destroy up to 6 targets in the air and 4 on the ground.

Zhuk-AME is a multifunctional, multimode AESA radar (LTCC) that is designed for detection, acquisition, tracking and classification of targets on land, air and water. It can provide information support at low altitudes, navigation, as well as guidance for sophisticated air-to-air and air-to-surface weapons.

«This modernized Zhuk radar station has already received its passport for exporting.  The system beats competitors in many tactical and technical aspects and was designed for the new generation of aircraft including the MIG-35 fighter,» said Deputy CEO of KRET Igor Nasenkov.

Zhuk-AME can function in various modes and can simultaneously detect and track targets on land, air and water and provide missile guidance for these targets.

AESA allows to increase the detection range for Zhuk-AME up to 160 km and to simultaneously operate in "air-air" and "air-land" modes, to recognize and classify group and single objects, to simultaneously attack multiple targets with high-precision means of destruction, as well as to transmit tactical data to other aircraft and to carry out electronic countermeasures.

Concern Radio-Electronic Technologies (?RET) is Russia's largest instrument engineering holding. It was established in 2009, and is part of the State Corporation Rostec. The company develops and produces avionics for commercial and military aircraft, electronic warfare (EW), Identification Friend or Foe systems (IFF), measuring equipment for various purposes (ME), electrical connectors and cable systems, various household appliances, and medical devices. The concern unites 76 research institutes, design bureaus and production plants located in 29 regions of the Russian Federation. The number of employees is about 54,000.

State Corporation Rostec is a Russian corporation founded in 2007 for the purpose of promoting the development, production and export of hi-tech civilian and military industry products. It comprises 700 organisations, nine of which have now been formed as holding companies of the military-industrial complex, six of them are involved in civil industries and 32 are directly controlled. Rostec’s portfolio includes recognised brands such as Avtovaz, Kamaz, Kalashnikov Concern, Russian Helicopters, and VSMPO-AVISMA. Rostec’s organisations are located in 60 constituent entities of the Russian Federation and supply their products to the markets of more than 70 countries. The revenue of Rostec in 2015 amounted to RUB 1.140 trillion. Average salaries within the Corporation amounted to RUB 41 thousand and tax deductions into the treasuries at all levels exceeded RUB 160 billion. According to the new Rostec strategy, the new main goal of the Corporation is to facilitate technological advantage of Russia at highly competitive international markets.  Planned volume of investments into development until 2025 is RUB 4.3 trillion.  .

Compose your email to Max Smetannikov at KRET.