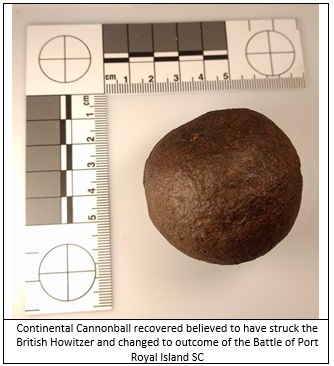 The fate of an important South Carolina Revolutionary War battlefield is still uncertain in Beaufort Country.  While it is common for Revolutionary War battlefields to possess something of historic note, the 1779 Battle of Port Royal Island SC, stands out with brow raising distinction.  Although conservative in size to other South Carolina’s battles, this was the state’s first land engagement between professional British, Militia, and Continental forces.  The entire American force represented a diverse cross section of ethnic backgrounds from South Carolina including African Americans, serving for the first time in battle with the US forces in the state.   This was America’s first victory during the British Winter Campaign 1778-1779 and helped boost morale and recruitment for the Southern American Army.  The battlefield also had the distinction of being the only engagement where two of America’s Declaration of Independence Signers fought side by side for American Liberty.

On a crisp February afternoon in 1779 along a swampy marsh causeway, American artillerymen, skilled in the art, set up a killing zone and awaited an invading enemy.  Their intention was to inflict a little payback on approaching British Forces who had been conducting a destructive flotilla raid into South Carolina’s Lowcountry.  The Revolutionary War had arrived in the South in a major change in British war strategy.  “As the British approached the Town of Beaufort, smoke could be seen from burning nearby plantations including from Declaration of Independence Signer’s Capt. Thomas Heyward Jr. plantation,” claims battlefield archaeologist Daniel Battle.  Battle spent months looking for the Port Royal site before finally locating the footprint in 2016.  “This was the first successful British invasion into Carolina but instead of the British trying to reignite support for the Royal Government as declared, the invaders brought a brutality to Georgia and Carolinas that only served to strengthen a resolve for American Independence.”   “The flotilla raid amounted to nothing more than a big excuse to plunder whatever they could in the Lowcountry.”   The Port Royal engagement, also referred to as the Battle of Beaufort or Gray’s Hill, was the welcoming party of Patriot Hero General William Moultrie and who just a few years earlier, had successfully defeated a massive British amphibious force at Charleston in 1776 and symbolled Carolina with the palmetto crescent flag.   In a fiery show of Patriotism, Moultrie paced his American lines reminding his men of the freedom they were fighting for and “threatened to shoot any soldier who flinched from his duty.” according to the remembrance of Ephraim Cohen, a member of a Jewish company from Charleston.

An American force of about 300 mostly militia, clashed with about 200 professionally trained British Regulars along a stretch of road just north of the town of Beaufort, SC.   “The American force was about as ethnically diverse as you could find,” Battle claims.  One company was the “Free Citizens” of predominant Jewish citizens of King Street in Charleston as well as Scotch-Irish, French, German, and African Americans like Jim Capers of the 4th US Continental Artillery.  Some of American military units included the Beaufort County Militia, the Silk Stocking Company, and the Charles Town Battalion of Artillery.  This included South Carolina’s Signers Thomas Heyward Jr. and Edward Rutledge.  Of the 56 Declaration Signers, only 9 ever fought in battle. “These SC signers didn’t just participate, one was wounded and their personal efforts actually effected the outcome of this battle,” Battle claims.  The British force, under Major William Gardner, likewise diverse, consisted of companies of the 60th Royal Americans and the 16th Regiment.   Arriving from Florida, these units were confident of victory over the southern militias.

The Port Royal Battle opened with cannon fire with the first British round fatally wounding an American Artillery officer.  The American cannon reply was immediate and struck the British commander’s horse and killing two British officers beside him.  A third shot, from the well-aimed Continental gun, struck and splintered the only British artillery piece making the gun crew flee into the woods.  “That shot immediately gave the Americans a decided strategic advantage on the field.”, Battle claims.  The British troops were already committed to the attack and were attempting to pass across a corduroy swamp causeway and to an open field of felled logs.  Deadly lead canister shot, the size of marbles, spewed into their ranks resulting in significant British casualties.  After almost an hour, Moultrie, with powder running low, withdrew and left a crippled stunned enemy on the field.  The British claimed that Moultrie’s falling back signaled victory.  “This was old fashion face saving on the part of the British,” Battle claims.”  “A predominant Southern militia, similarly to what occurred at Lexington and Concord Massachusetts, had beat a professional British Army in open battle.”

“Up until a few years ago, the exact site of this engagement was speculative and almost completely forgotten.”  claims Battle.  “After discovery, I knew we had a challenge on our hands if we were to save a part of this site.”  I hope that the Beaufort Marine Corps Air Station will recognize the patriotism value of this site and partner with us in telling this story of diversity and our struggle for American Independence.

In August 2017, the National Park Service gave a nod to the importance of this battlefield when it awarded the non-profit group, Georgia American Revolution Preservation Alliance, a grant to study the event.  “We have other tasks at hand including featuring a public interpretive display at the Verdier House Museum in Beaufort, SC which will be open free to the public.”   “We are inviting much needed donations via Facebook to assure this site gets on the public historical radar.”, Battle stated.     https://www.facebook.com/GARPA1776/#