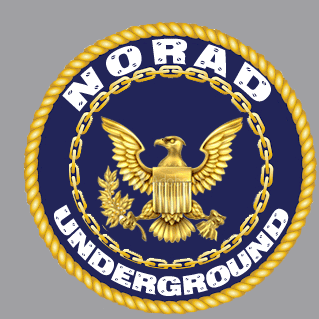 NORAD's civilian customers seek protection from financial collapse which would deprive millions of Americans of electrical power. They also seek protection from a nuclear explosion, fallout or the EMP (electromagnetic pulse) a nuclear bomb can cause. An EMP attack could wipe out the power grid and create severe economic and social collapse. Fears are particularly strong about some radical small country like North Korea sending nuclear missiles to America either from land to land or from ship to land.

While many shelters are cramped and dark, even claustrophobics feel fine in the S16-16 civilian underground shelter. The 256 square foot space is almost as large as a double-car garage. Many shelters use rounded "culvert drain" designs, but the S16-16 uses high sloped ceilings, allowing for much more usable space. Ceiling heights range from 8 to ten feet, much taller than average conventional ceilings. A 6 foot tall person has two to four feet of clearance overhead.  Occupants can store 96 five-gallon food buckets and 400 rolls of toilet paper in the in-wall storage shelves so that none of the survival supplies clutter up the living area.

The S16-16 bomb shelter's solar energy system powers the stainless steel SEAM (Severe Environment Air Module) HEPA dust air filtration system. The Military S16-16G-MIL shelter's diesel generator powers NBC (Nuclear Biological Chemical) SEAM for both breathing and for generator cooling. NBC air filtration systems are “Bag In-Bag Out” so the filter trays can be changed without coming into contact with a contaminated filter element. The Military SEAM unit also has a test port to test for chemical warfare agents in the air without going outside.

Equipped with the Plumbing Package option, the S16-16 allows normal living with hot and cold running water, fiberglass shower, conventional sinks, a microwave oven, a stove, an a conventional flush toilet that empties to a conventional septic system. "People in the S16-16 bomb shelter "do not have to live like cavemen," said Derek McCarthy, NORAD Sales Engineer.

The S16-16 civilian and military models offer multiple protections from nuclear, biological, chemical threats, war, terrorism, storms, fires and floods. Multiple intruder defenses make the shelter very difficult to defeat. Emergency escape hatches are available. Nuclear blast protection is documented in NORAD's extensive performance data on its shelters.  At 0.9 miles from two 100 kiloton nuclear blasts a person inside the S16-16 bomb shelter would have the same chance of injury as a person living normally in peacetime.

The S16-16 is manufactured with a cathodic corrosion protection system allowing a 30-50 year structural warranty. Steel underground shelters without this level of corrosion protection weaken 3 to 5 % each year. NORAD's incredibly strong shelters are designed to be buried under hundreds of thousands of pounds of earth pressure for 50 years without weakening.

NORAD announced that the S16-16 bomb shelter will go into production at the end of September 2016.