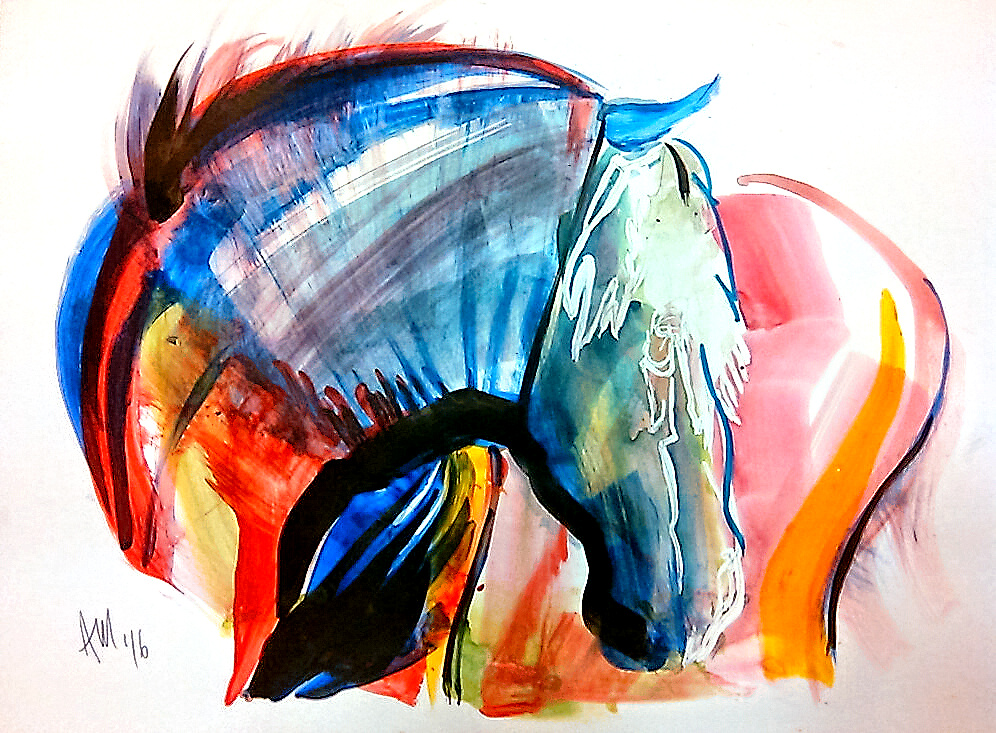 Gallery Hours: Saturday and Sunday, 1-5 pm or by appointment

4/11/2016 (PRESS RELEASE JET) -- Gallery 1448 is happy to present “E.quine”, Ashley Milburn’s new body of work.  The subject of these powerful, yet lyrical watercolors and ink wash drawings on paper is the horse; a departure for Milburn, who is known for his visualizations of issues concerning race relations. The springboard for the current subject matter was a painting by Milburn depicting the legend of Jocko Graves, a young black boy who is said to have frozen to death while tending George Washington’s horses as Washington was crossing the Delaware during a snowstorm on Christmas day, 1776. The strong, but gentle curve of the horse’s neck spoke to Milburn of protection and power which inspired him to continue exploring the form.

Artists have been fascinated by the horse as early as 25,000 years ago, as discovered in the cave paintings at Lascaux, France. Recently researchers have proven that these paintings, with their splotchy patterns, were not expressionistic or abstract depictions, but actually naturalistic renderings of animals alive at the time.

The power and romance of the horse in the history of art is undeniable. Leonardo Da Vinci himself died heartbroken because his vision of a 24 foot tall bronze horse was never realized in his lifetime. Monuments to heroic men astride their horses are a common sight in cities everywhere.  Edgar Degas, obsessed with capturing poetry in motion, painted, drew and sculpted horses before he turned to the classical ballet for subject matter. The photographer Edweard Muybridge experimented with motion photography to solve the mystery of the horses gait as it ran, proving that all four hooves of a racehorse are simultaneously off the ground. The painter Susan Rothenberg used the horse as a vehicle to examine the properties of painting as a two-dimensional construct. The sculptor Deborah Butterfield has adopted the structure of the full size horse as her means to invent new ways to construct form. And who can forget the impact of the falling horse at the center of Picasso’s Guernica?

Chinese and Japanese artists often used the fluidity of the Sumi ink technique to define the curves of the horse in motion. These dynamic artworks heavily influenced Milburn, who uses a paper towel to mimic the large brush strokes. He says this simple approach keeps the work from becoming too precious and frees him from a traditional mindset, resulting in a more contemporary effect.

In his statement, Milburn says:

“I want to capture more of the “spirit” of the horse. The horse is a visual equivalent for power and gentleness. My work seeks to explore the nature of this power. The works are not meant to be portraits of the horse; I’ve tried to push past what I know about painting the horse to seek more. For me, the power lies within the head and torso; the intellect and the heart.”

Milburn’s work, influenced by the past, adds another layer to artists’ fascination with an animal whose service to mankind contradicts its wild nature.  His strong portrayals of the horse’s form reveal both the boldness and the softness of its character.

Sadly, Ashley’s beloved friend and companion, his dog, Adee has contracted a serious medical condition. Ashley is offering prints of his beautiful horse drawings, as well as an original piece for contributions to his care. Please click on the Go Fund Me campaign link for details.

Thank you for any support you can give.

Compose your email to Gallery 1448 at Visual Artist.