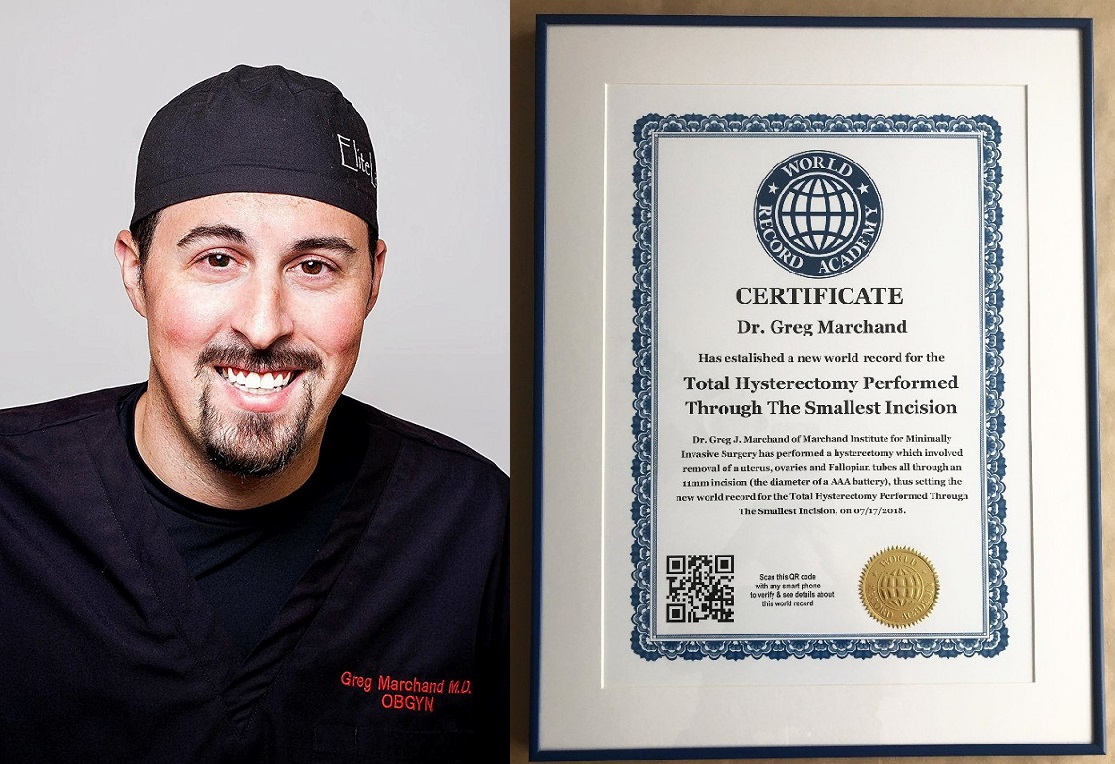 The World Record Academy today Awarded Dr. Greg J. Marchand a world record for performing hysterectomy through the smallest incision ever. The surgery involved removal of a uterus, ovaries and Fallopian tubes all through an incision the diameter of a AAA battery. The record was awarded after a lengthy verification process performed by the academy to verify the results.

Dr. Marchand performed a hysterectomy through an 11mm incision at the bottom of the belly button using a technique called “laparoscopic single-port hysterectomy.” Although laparoscopic hysterectomy has been performed through a single incision before, this is believed to be the smallest incision that it has ever been performed through. The Academy reported that the Mayo Clinic and Cleveland Clinic had reported cases through a 15mm incision, which was believed to be the previous record.

The patient, Mary Coble, provided the Academy with pictures of her belly from 4 weeks after the surgery. There was no scar visible whatsoever. Ms. Coble had suffered from debilitating pelvic pain from endometriosis and adenomyosis for years before being recommended to have the hysterectomy after other conservative treatments for her pain were unsuccessful. She assumed she would be having the hysterectomy through the same incision that she had her cesarean section went through, which was a lower abdomen horizontal incision, often referred to as the “bikini cut.” She states she was surprised and delighted to find that the procedure was able to be performed through only a tiny incision in her umbilicus.

Dr. Greg Marchand, an SRC Accredited Master Surgeon, developed this technique and led the surgical team that performed the surgery. The procedure was a modified version of a laparoscopic hysterectomy, where the only incision used is in the patient’s umbilicus. “A very novel part of our technique,” said Dr. Marchand, “is that because of the instrumentation we use, the incision is always going to be a reproducible 11 millimeters.”

“The recovery was really easy compared to my prior laparoscopic surgeries,” said Mary Coble following the procedure. Mary pointed out that she has no scars at all from the surgery, as the only tiny scar present is on the bottom of her belly button, where it is effectively invisible. Mary has previously had both laparoscopic surgery and delivered her baby by cesarean section, so she is no stranger to recovering from surgery.

“I think it’s a great advancement for minimally invasive surgery.” said Dr. Marchand, the lead surgeon. “When the incision shrinks from 15mm to 11mm, there are many benefits to the patient. There will be less postoperative pain, a quicker postoperative recovery, and a much lower chance of the incision causing a hernia later, which is a known complication of this type of surgery. My favorite part is that you can’t even see the incision on the patient.”

For media requests or more information, please contact Karen Thomas at Thomas PR at (631) 549-7575 or kthomas@thomaspr.com. Dr. Marchand is available for interview and Ms. Coble is also interested in sharing her story and interviewing for the purpose of raising awareness minimally invasive surgery and to help other women facing hysterectomy.

Description of Technical Procedure Performed: Successful Single-port Total Laparoscopic Hysterectomy with bilateral salpingo-oophorectomy and lysis of adhesions secondary to scar tissue from a prior cesarean section. The procedure was performed using an Olympus Tri-Port device using a modified technique through a smaller incision. The incision and abdominal entry was performed using an Ethicon 11mm blunt tip trochar in order to be sure the incision was exactly 11mm, and that the procedure was reproducible. A 5mm 30 degree laparoscope was used with wavy graspers, a bovie laparoscopic extender “hook,” and a Covidien Ligasure Blunt Tipped 5mm device.

Method of Verification of Record: Direct video evidence of procedure and identifying information compared with final pathologic diagnosis by board certified pathologist. Patient consented to disclosure.

About SRC - Established in 2003, Surgical Review Corporation (SRC) is an internationally recognized patient safety organization dedicated to recognizing and refining surgical care. SRC is the leading administrator of quality improvement and accreditation programs for surgeons and hospitals worldwide. SRC’s proven methodology, known as the “Cycle of Excellence”, results in quantifiable and unparalleled improvement in outcomes, patient safety and costs across surgical specialties. For more information, visit www.SurgicalReview.org.

Compose your email to Victoria Giambattista at Surgical Review Corporation.