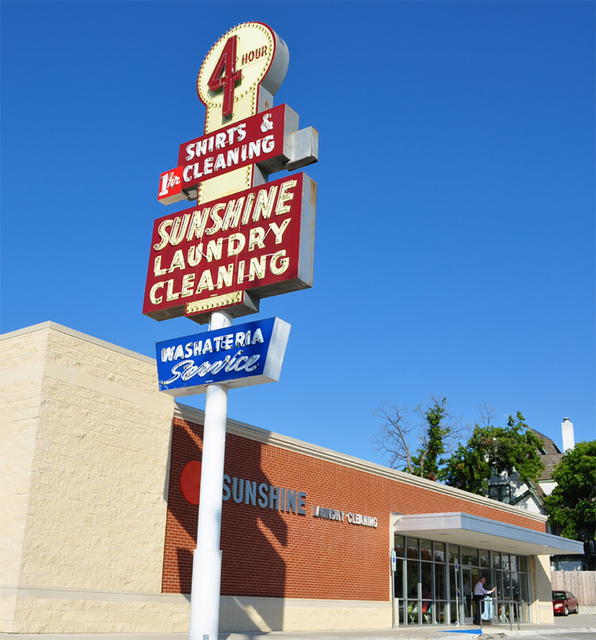 During the 1920’s, Dallas’ legendary entrepreneurs and visionaries prospered. More than 1 million guests attended the Texas State Fair, Dallas hosted dignitaries and national politicians, women voted for the first time in a general election, Charles Lindbergh landed at Love Field in the Spirit of St. Louis, air mail between Dallas, Chicago and New York herald a new era in transportation, landmarks such as the Adolphus Hotel, Magnolia Building, Majestic Theatre, Millner’s Supply Company and many others still stand today. This decade heralded the grand entrance of Dallas as a fashion mecca with the iconic downtown Neiman Marcus located on corner of Main Street and Ervay Street.

As downtown flourished so did ancillary businesses that were often family-owned. Today, three generations and seventy-five years later, Sunshine Laundry and Dry Cleaners continues to thrive. The Ashmore family, led by three brothers Jim, Robert and Joe, founded Do It Right Cleaners and Acme Cleaners on Main Street and Akard in the late 1920’s.  Just around the corner, at the Baker Hotel, the Laundry Manager, Eddie Vassallo was soon to become an Ashmore brother-in-law and contributor to the business. By combining experience in commercial laundry, dry cleaning, expert alterations, business savvy and customer service, Sunshine Laundry and Dry Cleaners was formed. Being resource young entrepreneurs, they recognized the growth and opportunity north purchasing the property on Maple Avenue next Parkland Hospital in 1940. That same block on Maple Avenue still serves as home to the oldest and one of Dallas’ largest laundry and dry clean operations.

All four founders continued in the business until it was passed down to the second generation of the Ashmore family. Frank, Sr., joined by his cousin, Jerry carried on the legacy and continual growth with facility expansions in 1953 and again in 1960.  In 2011, Sunshine invested in the Stemmons Corridor area to build a completely new production plant with  state-of-art equipment,  improved  efficiency and  emphasis on  green  initiatives.   The Sunshine retail store front remains on Maple Avenue but across the street from the original location. Thousands of pieces are processed daily in the production facility serving a wide range of industries from health care and with a nod to their roots, hospitality. Sunshine delivery vehicles are seen throughout Dallas neighborhoods and business districts.

Fast forward 75 years and each day you can still find an Ashmore greeting customers and working at Sunshine.  Today, the third generation led by Frank, Jr. alongside his parents, Frank Sr. and Edna, Sister Stephanie and brother-in-law Mike Ingram are mindful of the heritage of Sunshine and responsibility of the future. The family respects tradition carrying on Dallas’ best kept beauty secret – Sunshine pressed sheets. Yes, bed sheets are laundered, pressed, folded neatly, wrapped in paper and carried to your car with a smile and wish for a perfect night’s sleep.

According to Harvard Business Review, just 10% of family owned businesses remained active privately held companies for the third generation to lead.  The Ashmores’ have beaten those odds with a simple formula – start at an early age, value service and personal relationships and carry your own weight.  The family recognized early on it was important to focus on customer service from the moment the customer enters Sunshine – which is often in the laundry and dry cleaning business. It is natural to become friends with customers, or in the case of the Ashmores, customers are considered family. Sunshine staff has seen generations of customers and knows the names of their children, dogs, life events, favorite outfits and of course the “starch or no starch” preference.

When you’re in the business of cleaning Dallas’ dirty laundry, trust and discretion are critical factors of success. From jewels to unmentionables, Sunshine ensures everything found is returned to the customer without a thought or discerning eye.

Now the fourth generations of Ashmores are already in training working summers and during school breaks. They are learning the same important lessons of doing not just a good job but a great job no matter how long that takes and fulfilling the expectation of a memorable customer experience. These values will continue to serve Sunshine another 75 years.

Compose your email to Justine Sweeney at Sweeney Media Group.