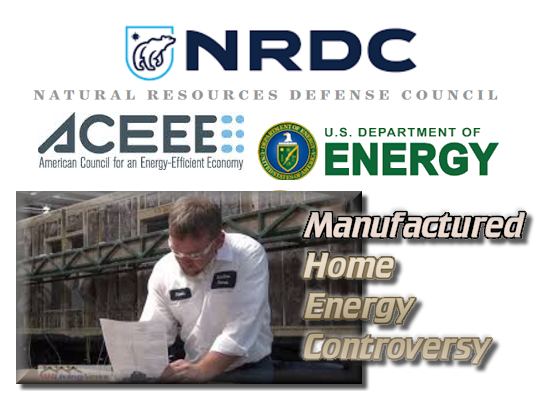 Controversy about the proposed U.S. Department of Energy (DOE) standards for manufactured housing has followed the flurry of commentary from various special-interest and non-profit groups, covered by recent news media reports.

While NRDC, ACEEE and most of the coverage has favored he DOE proposal, the analysis states that what is being overlooked are prior reports by independent professionals and actual manufactured home owners.

In the analysis by MHLivingNews’ and MHProNews’ publisher, L. A. “Tony” Kovach points out that Dr. Harold Hunt, Ph.D., has previously studied the issue of manufactured housing energy efficiency and came to a very different conclusion.

Dr. Hunt is a research economist with the Real Estate Center at Texas A&M University.

In a report with the tongue-in-cheek title, Not Your Grandfather’s Trailer House, Hunt states “Few would argue that significant strides have been made in the quality of construction, wind resistance and aesthetic appeal of a modern manufactured home.”

“What may be surprising to real estate licensees,” Hunt says, “is the level of energy efficiency available to today’s manufactured housing buyer.”

The Manufactured Housing Institute (MHI), which initially embraced the DOE proposal, has more recently raised cautionary notes about the plan.

The Manufactured Housing Association for Regulatory Reform (MHARR) has taken an opposing stance from the outset, saying that the standards would harm consumers seeking quality affordable manufactured homes, which are already more efficient than most conventional houses of similar size.  MHARR also states why they see an adverse impact on producers of manufactured homes, if the standards are imposed.

Kovach’s analysis begins by admonishing Unger for not citing his sources, and for using improper terminology.

Kovach points to the National Association of Home Builders (NAHB) “Priced Out” report, which demonstrates that hundreds of thousands of potential home buyers would be priced out of the market by the increased costs caused by the DOE’s proposals.

As an example of home owners who have stated they find their manufactured homes to be more energy efficient than other houses they’ve owned, a video interview with an engineer and his wife, Jerry and Karen McKibben, is part of the award-winning trade publisher's commentary.

McKibben, who previously owned a true mobile home (meaning, pre-HUD Code), as well as a conventional on-site constructed house, state their manufactured home saved them over half the cost of new, conventional construction, plus continues to save them in lower utility costs too.

No doubt the non-profit and policy-advocates meant well, says Kovach, but their analysis he says reveals a variety of flaws.

Included among those is the fact that the DOE’s estimated time to recoup the higher costs are years longer than most home buyers plan to keep a home, before selling and moving on to a different home.

“Perhaps the biggest fallacy of this entire DOE proposal is that it doesn’t respect the consumers right to choose,” says Kovach.  “Energy Star rated manufactured homes are already available. Some manufacturers specialize in energy saving, and some even offer “net zero” factory-built homes. Upgraded insulation can already be ordered from almost any producer by any consumer who wants it.”

“Why not let the consumer choose for himself? Isn’t that the American Way?” Kovach’s full analysis, including references and downloads, is found in the new MHProNews article entitled  NRDC, ACEEE on DOE Energy Rule Proposals – Analysis – Helpful or Harmful for Consumers, Manufactured Housing Industry? ##

(Image credits: each logo is the property of their respective organization, and is used here under fair use guidelines. Photo, Dennis Raper, chain saw artist and supervisor at Red Bay, AL based Sunshine Homes, is doing a quality inspection report with an Energy Star home under construction in the background (credit, still from video on MHLivingNews.com).