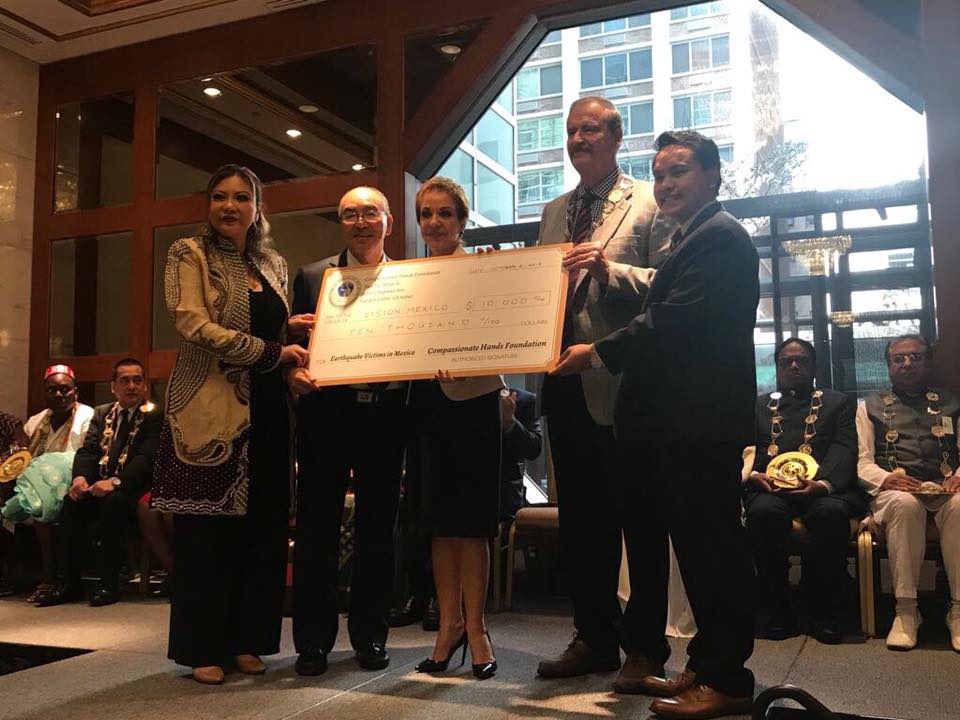 On September 19th, 2017 a magnitude 7.1 earthquake shook the people of Central Mexico during the early afternoon hours. This powerful earthquake toppled buildings, damaged roadways, and rendered many services unusable. Nearly 400 people were killed as a result with thousands more suffering injuries.

While many around the world watched helplessly as the people of Mexico scrambled to help their fellow neighbors; the Compassionate Hands Foundation began raising money through their network of donors and volunteers. At the 5th Annual Global Official Dignitary Awards (G.O.D Awards) in New York, Sky Pham – on behalf of the Compassionate Hands Foundation and Vietnamese Students in the U.S.A. – presented the 55th President of Mexico, Vicente Fox Quesada and former First Lady Marta Sahagún de Fox with a cheque for $10,000 donating to the Vision Mexico Foundation to aid relief efforts in Mexico.

As the people of Mexico continue to rebuild and restore essential services including health care facilities and schools; it is the hope of Sky Pham and the Vietnamese community that this money can be used to help the recovery of their friends in Mexico.

Many donors and volunteers worked to raise this money but a very special acknowledgment goes out to Carlos Slim who multiplied the donations by 5 in a show of unbelievable generosity and empathy.

As the relief efforts in Mexico progress, Sky Pham and the Compassionate Hands Foundation encourage others to donate to when they are able. There is a long road ahead for the people of Central Mexico but they should know the world is there for them in their greatest hour of need.

Pham Nguyen Dang Trinh, known as Sky Pham, was born in Saigon, Vietnam. His academic achievements are impressive and have lead to today, where he graduated from Superior Court of California, County of Orange Leadership Academy in 2015, California State University, Fullerton in 2016 and is pursuing an MBA at Harvard University. He is also managing an investment and coffee company, Kien Nam Group and Copen Coffee, in California as the CEO. In addition to his academic and business work, Sky Pham has also taken on a number of charitable endeavors including his work with the Compassionate Hands Foundation as the CEO.

His entrepreneurial spirit and hard work have given him the opportunity to give back to communities around the world including in his native Vietnam. Sky Pham’s story was shared to the Orange County community through his article, “Student Recycle Club combines education and stewardship” on the Orange County Register and “Vietnamese-American aspire to change coffee” on the  Daily Titan.

Sky Pham believes that every action counted and that we all have to make small efforts or nothing would ever change. Sky looking forward to creating more changes to make the world become a better place. As he always believes, "What we do today, right now, will have an accumulated effect on all of our tomorrows!"

Compose your email to Window Press Club at Reagan Clarkson.