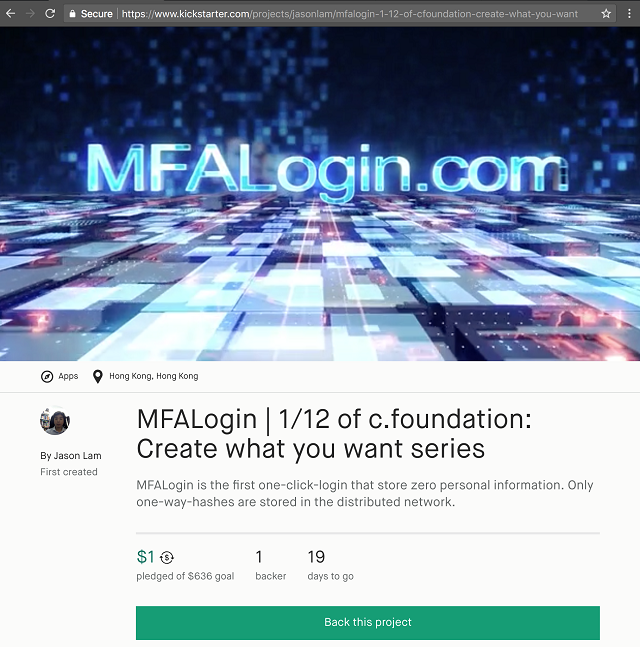 C Foundation, a to be founded Social Enterprise, recently announced the launch of MFALogin, a multi-factor-authentication and blockchain based quick and secure registration and login module. Created as an innovative solution to the vulnerability problems of the SMS-based 2-factor-authentication (2FA) method, the MFALogin module helps software users and developers overcome the prevailing security challenges at no cost.

2-factor authentication seeks to add an extra layer of security to password-based systems by using something the user has on them other than the username and password - like a piece of information known only to the user. The most common 2FA method is the SMS-based 2FA wherein a unique code or One Time Password (OTP) is sent to the users mobile phone via SMS.

However,  this method is flawed security-wise because the SMS is delivered over the now-dated Signaling System 7 (SS7) supported network which can be easily accessed by anyone.  "A lot of vulnerabilities in Signaling System 7 (SS7) are being exploited on a global scale and widely acknowledged. Unfortunately, It is the must-have architecture support for the global public switched telephone network (PSTN).” said Jason Lam, the Hong Kong based founder of C Foundation, “Even worse, our daily SMS messages and credit card two-factor-authentication token are delivered through this hackable network."

The secure MFAlogin authenticates by combining multiple authentication methods seamlessly into a one-click action, resulting in a smooth yet highly-secure experience. It avoids the potential security loopholes that plague 2FA by decoupling SMS from account identities.  It doesn’t store any personal data in a distributable network and only uses a one-way hash (meaningless character/number sequences) of data just enough for validation. To further secure the system, data transfer between your mobile and a third party provider is end-to-end encrypted with a key unique to your session making it impossible to hack into.

To encourage users and developers who might be worried by the cost of enhancing security, C Foundation has made MFALogin free. The system is ready-made and can be easily incorporated to allow developer focus on core areas. With the MFALogin, users can complete the registration and login process in as little as 10 seconds.

C Foundation, will be founded as a Social Enterprise to ensure fundings be put into good use. They has set the ambitious goal of providing the missing parts of the Internet which includes wide range of things. This they aim to achieve by providing community with quality solutions funded by people with similar needs. They have launched a Kickstarter campaign to raise funds to accomplish this goal ( https://www.mfalogin.com/kickstarter ). They send out surveys to prospective backers to get their pain points and focus on a solution.

Compose your email to Jason Lam at C Foundation.