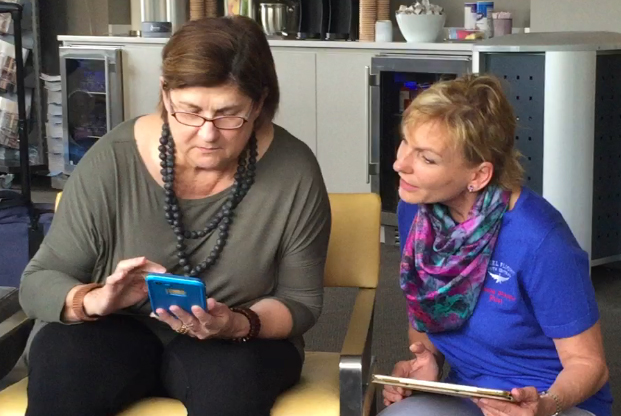 Sitting in the cockpit of her customized Cessna Caravan 208 and wearing a colorful scarf, high heels and a perfectly fixed pixie cut, pilot Dianna Stanger chats about dog collars with Jasmine Gordon, a manager at Calhoun Air Center, making light conversation before flying one of about 15 flights she will do for Angel Flight South Central this year.

Angel Flight South Central is a nonprofit organization that helps people who need medical care that cannot be provided to them locally. More than 1,000 pilots from Texas, New Mexico, Arkansas, Louisiana and Oklahoma volunteer for the organization.

On this trip, Stanger traveled from Port Lavaca to New Orleans to pick up Deborah Bailey, 66, and her husband, Neil Fears, 56, to take them to Houston, where Bailey will receive medical care at MD Anderson Cancer Center.

When Stanger arrived at the Lakefront Airport in New Orleans on April 6, she greeted Bailey and Fears with a big smile and handshakes. Stanger was the first pilot Bailey had flown with when using Angel Flight.

"It was a number of years ago, so it's nice to see, first, a patient I've transported before, and the fact that she's still around due to the treatment that she's getting at MD Anderson," Stanger said. "It's just a lot of positive enforcement that what we are doing is good."

Bailey was diagnosed with atypical meningioma tumors - brain tumors - in February 2013 and has used Angel Flight three or four times. She has trouble standing and continues to sit while speaking to Stanger. Stanger knelt down as Bailey showed pictures of other pilots she has flown with using Angel Flight. Before making the journey, Stanger takes Bailey and Fears' luggage to her plane.

Bailey said her favorite plane was "the one with the parachute" (a Cirrus aircraft). She said that's the one she felt the safest in.

After Bailey's first surgery, she lost movement in her left leg, a lot of her memory and the capacity for deductive reasoning.

"I couldn't do puzzles anymore," she said.

Bailey had to learn how to walk again and still has trouble finding the right word and looks to her husband of 20 years for certain words.

Bailey has doctors' appointments about every three months and uses commercial airlines when not using Angel Flight.

The nonprofit doesn't charge the patient and is funded completely by the pilots. Donations from the public go to coordination of the flights and finding new patients to help. Houston and Dallas also offer voluntary ground service.

She still has trouble standing for long periods of time and doing simple tasks such as putting on her shoes, which can make it difficult for her to travel.

Since her illness, she has suffered from anxiety and gets nervous around large groups of people. When going to the airport, she said, many times she and her husband are separated during security checks, and she has to do everything herself.

When using Angel Flight, "I just walk right on," Bailey said. "There's no security check, and they take my bags."

Stanger, who has been the board chairperson for Angel Flight since October, said most patients are people who can't afford a commercial flight or who have just undergone chemotherapy and can't risk infection by using a major airline.

When they arrived at the William P. Hobby Airport in Houston, the car service, also coordinated by Angel Flight, was already waiting to take the bags and get Bailey to her appointments.

"(The drivers) are always on time," Bailey said.

Stanger and Bailey hugged before saying their goodbyes.

Before going back to Port Lavaca, Stanger and Gordon made a stop at the Southern Flyer Diner at the Brenham Municipal Airport to grab a quick bite. The booths are upholstered in a red, plastic-like material that sparkles, and the waitresses wear poodle skirts - giving the diner an old-time vibe. They treat themselves to hot dogs and a side of fries before heading back.

Stanger said she always feels nervous before an Angel Flight.

"I always get a little nervous before a flight and happy because I've already talked with the patient, and I know I'm going to make a difference for them and they are going to be able to get their treatment or come home from their treatment," she said. "It's just a lot of mental process to check the weather and make sure it's going to be the very best flight they can get."

She said what she likes the most about being a pilot for Angel Flight is the personal reward, how it challenges her as a pilot and the people she comes across.

When Stanger first applied for Angel Flight, the nonprofit didn't accept her application because she had a helicopter, but officials later changed their minds, and she has been flying for them since 2001.

One flight most memorable to Stanger was with a 7-year-old boy named Kevin from Nacogdoches. A week before the flight, Stanger called his parents and told them they would be taking a helicopter. Kevin was ecstatic, and his parents bought him a toy helicopter.

"When I pulled up at the airport, the helicopter was right outside the door of the main office, and Kevin was inside (the office) with his parents, and I opened the door and greeted Kevin," she said. "He was the cutest boy with this little play helicopter."

Not realizing that Kevin had lost his sight because of a brain tumor, Stanger kept pointing to the helicopter and saying, "It's right there," but he wasn't able to see it. Stanger said they flew over his neighborhood, and his neighbors all waved at him.

"The changes in the light and the terrain when we would make turns. He could still tell that he was in a helicopter, and he had just enough visual cues from the light and the dark that it was just the best ride ever for him," she said. "So Kevin will always be my favorite ride ever."